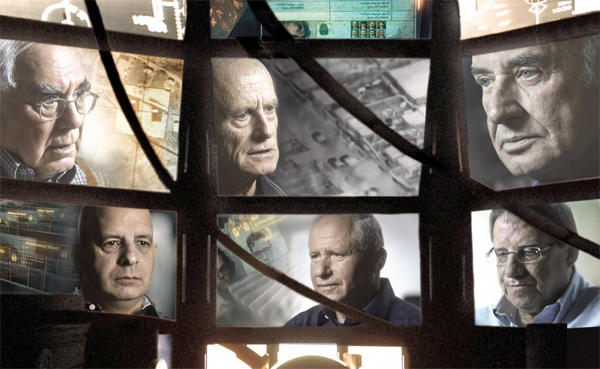 The Gatekeepers is Shockingly Revealing The first time “The Gatekeepers” screened in this country, I was in the audience. It’s not unusual for films to have their North American debut at the Telluride Film Festival. But in the case of “The Gatekeepers,” its reputation preceded its premiere.

Director Dror Moreh’s candid documentary had already caused a stir in the Jewish press. Moreh had accomplished something seemingly impossible. He had interviewed on camera all six surviving heads of Shin Bet, the Israeli security agency whose activities and membership are closely held state secrets.

Among its many duties as Israel’s internal security agency, the Shin Bet is charged with domestic counterintelligence, providing intelligence for counter-terrorism operations in the West Bank and the Gaza Strip, exposing terrorist rings and interrogating terror suspects.

If it was surprising that these men all agreed to be filmed, what they said on camera was downright shocking. The movie revealed the inner workings of an agency whose  motto translates into: “Defender that shall not be seen” or “the unseen shield.”

The men were also remarkably forthcoming in expressing their personal opinions, which is what had caused such a furor. Despite differences between the men, there was a definite trend toward more liberal views than might have been expected given the nature of their professional lives.

This may have been what the director hoped for – or even solicited – but it is what these men were willing to go on record saying.

This challenging film went on to be nominated for Best Documentary Feature at the 85th Academy Awards.

Despite its deliberately provocative nature, there’s a great deal to be learned from Moreh’s dogged investigation into the agency struggling with Israel’s complex security challenges.

The film runs May 8-11 at the Boedecker Theater in the Dairy Center for the Arts. I will lead a talkback after the Wednesday, May 8, 7 pm screening. Click here for tickets

Kathryn has spent her professional life writing about, teaching, and presenting the arts. Founding Director of the Boulder Jewish Film Festival, Kathryn was Director of Menorah and ACE at the Boulder JCC from 2003 through August, 2019. The former film and theater critic for the Boulder Daily Camera, Kathryn is the author of "The Fifty Greatest Jewish Movies" and "The Fifty Funniest Films of All Time." kathryn.bernheimer@gmail.com
Previous Boulder JFS is Looking For Your Input
Next Children in the Holocaust Exhibit Opening and Reception