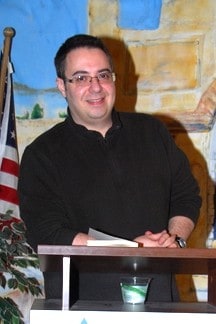 Sunday night, Menorah hosted the One JCC Reads program for this year, an exploration of the book Jewish Pirates of the Caribbean.

In the spirit of the “Jews of. . .” series of events, this one began with a Caribbean-flavored dinner. Professor Carlos Zarur shared video and remarks of the history of Jews in the New World, tracing their journeys from Spain and Portugal to Recife, Jamaica, Brazil, Curacao, Mexico and New Amsterdam (New York).

There was a network of Jews and secret Jews working together, through trade. Cotton, coffee, sugar, tea and slaves. Because of them – we have coffee and tea!”

Carlos highlighted the discussion with slides of synagogues, houses and graves. The descendants of these families even have reunions, and some trace their lineage directly to King David. For more – including whether Christopher Columbus was Jewish – read the book!

Photos from the event:

They call me "NewsHound IV," because I'm a clever Finnegan, sniffing out stories all over the Boulder area. I love Jewish holidays because the food is GREAT, especially the brisket. Well all the food. I was a rescue pup and glad to be on the scent!
Previous Medical Marijuana: A Panel Discussion
Next Heard in Israel: Earth Walk Post-Rocks the House