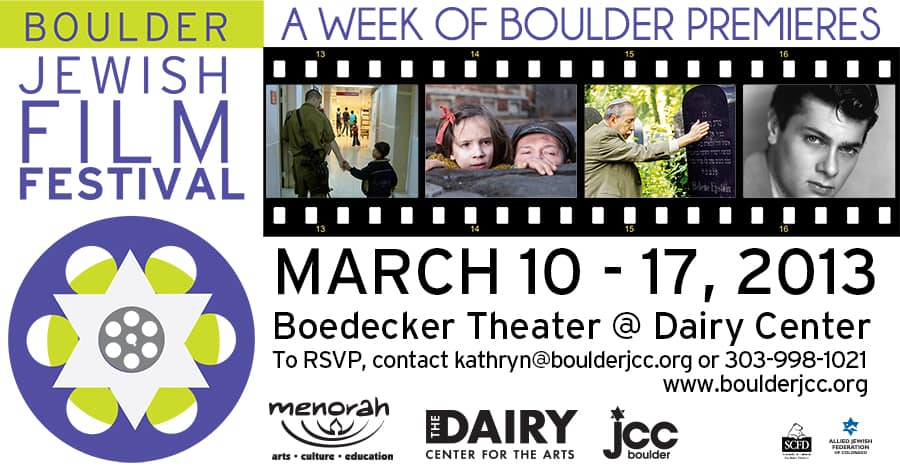 Tickets for the first annual Boulder Jewish Film Festival, sponsored by the Millstone Evans Group of Raymond James, are now on sale through the Dairy Center for the Art’s website.

The festival, to be held March 10-17 at the Dairy Center for the Arts, is presenting a diverse collection of 16 Boulder premieres – transformative feature films and documentaries celebrating the healing power of nature, love, friendship and music. There will be a talkback after each film.

The mission of the Boulder Jewish Film Festival is to explore the human experience through film, to provide audiences with insight into the Jewish experience, and offer opportunities for community connection as we showcase inspiring films that have relevance to modern life.

Filmmaker Marcia Jarmel, who grew up in Boulder, will appear in person at the opening night sneak preview of “Got Balz?” on Sunday, March 10 at 7 pm. The opening night film and discussion will be in the Dairy Center’s Performance Hall, a 250-seat auditorium, followed by a gala reception in the Dairy’s lobby featuring a Cuban band and food.

Closing night is also in the Performance Hall, on Sunday, March 17 at 6:30 pm, with a party in the lobby after the screening of “Hava Nagila (The Movie)”, with live music by the Boulder Klezmer Consort, and an old-style Bar Mitzvah buffet. The Denver Jewish Film Festival, which takes place in February at the Denver JCC, is opening with “Hava Nagila,” which has become a huge hit on the film festival circuit. Four other films will be screened at both festivals: “AKA Doc Pomus,” “Let My People Go,” “Orchestra of Exiles,” and “Beyond the Boundaries.” The New York Film Festival, which just ended, also included “Hava Nagila” and “AKA Doc Pomus.”

All other films will be screened in the Boedecker Theater, a state of the art cinema that seats 75. Given audience demand, special “spill-over” screenings will be held at the Boulder JCC and at the Boe. If tickets sell out, ticket buyers will be invited to add their name to a waiting list in case additional screenings are scheduled.

Full descriptions of the films below, including screening times, sponsors and guest speakers, can be found on the JCC’s website: www.boulderjcc.org. A charming coming of age story about a baseball-crazy Bar Mitzvah boy whose project involves a trip to Cuba with his grandfather, who lived there during the Holocaust

Closing Night Film and Party – With the Klezmer Consort Injured IDF soldiers find healing on the slopes of Aspen

A Fire in the Forest

Local filmmakers explore the mystique of the Bal Shem Tov, founder of Hasidism

From Shtetl to Swing

An enchanting journey that celebrates life and the immortality of memories

Two Polish boys, raised as Christians, discover they are Jewish and move to Israel to start a new life

Violinist Bronislaw Huberman saved close to 1,000 Jews – along with the musical heritage of Europe

Kathryn has spent her professional life writing about, teaching, and presenting the arts. Founding Director of the Boulder Jewish Film Festival, Kathryn was Director of Menorah and ACE at the Boulder JCC from 2003 through August, 2019. The former film and theater critic for the Boulder Daily Camera, Kathryn is the author of "The Fifty Greatest Jewish Movies" and "The Fifty Funniest Films of All Time." kathryn.bernheimer@gmail.com
Previous Reflections Honor Feels Like Good (Jewish) Karma
Next Holocaust Awareness Events at CU