Author Edward Kritzler had moved to Jamaica for work when he came upon a pirate’s journal in the library. He read an entry in which the English pirate described his first invasion of Jamaica in 1643. He found the capital deserted “except for Hebrews of the Portuguese nation who came unto us seeking asylum, and promising to show us where the Spanish had hidden gold.”

Intrigued by the entry linking Jews and pirates, Kritzler began researching the connection. What he discovered about Jewish activity in all aspects of the exploration of the New World so fascinated him, he wrote “Jewish Pirates of the Caribbean: How a Generation of Swashbuckling Jews Carved Out an Empire in the New World in Their Quest for Treasure, Religious Freedom – and Revenge.” 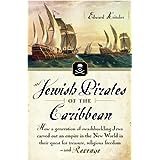 Sadly, Kritzler passed away shortly after publishing his examination of this colorful chapter of Jewish history. But we honor his memory and share his research with a One JCC Reads program on Sunday, January 27, beginning at 6:00 pm with a Caribbean dinner.

After the meal, Carlos Zarur will discuss the story of swashbuckling Jews who ransacked the high seas in the aftermath of the Spanish Inquisition.

At the end of the fifteenth century, many Jews had to flee Spain and Portugal. The most adventurous among them took to the seas as freewheeling outlaws. In ships bearing names such as the Prophet Samuel, Queen Esther, and Shield of Abraham, they attacked and plundered the Spanish fleet while forming alliances with other European powers to ensure the safety of Jews living in hiding.

Filled with high-sea adventures –including encounters with Captain Morgan and other legendary pirates – “Jewish Pirates of the Caribbean” reveals a hidden chapter in Jewish history during the Age of Discovery.

Pre-registration required — click here. The deadline is Friday. The cost is $18 for dinner and program.

For a short interview with Kritzler about his book, click here.

Kathryn has spent her professional life writing about, teaching, and presenting the arts. Founding Director of the Boulder Jewish Film Festival, Kathryn was Director of Menorah and ACE at the Boulder JCC from 2003 through August, 2019. The former film and theater critic for the Boulder Daily Camera, Kathryn is the author of "The Fifty Greatest Jewish Movies" and "The Fifty Funniest Films of All Time." kathryn.bernheimer@gmail.com
Previous Author Salon Series Features Bornstein
Next Israeli Elections: Left and Right Almost Equal