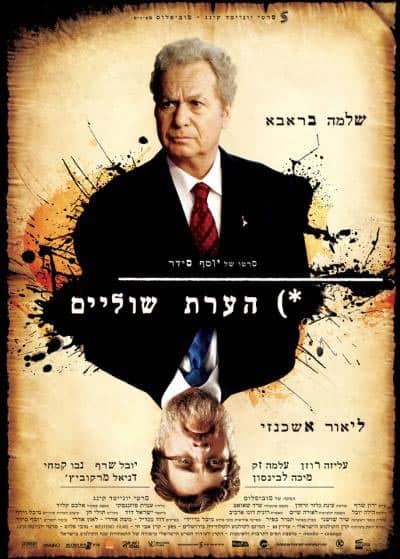 No Mere “Footnote” in Israeli Cinema Imagine an action-packed thriller featuring a battle between two super-heroes who just happen to be Talmud scholars. Ok, so “Footnote” is not action-packed, but this Israeli film is as gripping as any thriller. And, I admit, the scholars in question – a father and son harboring deep-seated jealousies and long-simmering recriminations – are hardly heroes. Yet “Footnote” makes us care deeply about both flawed men.

Nominated for an Oscar for best foreign film of 2011, “Footnote” opens at the Boedecker Theater at the Dairy Center for the Arts on Wednesday, July 25 at 7 pm. I will be on hand for a talkback after the film, along with guest Morah Yehudis Fishman, who knows much more about the art of studying Talmud than I do. The film will continue its run at the Boe through Sunday July 29. Check the website for times and to purchase tickets in advance – highly recommended as the intimate 60-seat Boe sells out often. Director Joseph Cedar’s powerful 2007 film, “Beaufort,” which Menorah showed as part of The Reel Israel series, also received an Oscar nomination – the first such nomination for an Israeli film in 24 years.

Director Joseph Cedar, an Orthodox Jew, explained why he chose to make a film that focuses on Hebrew University’s Talmud department: “It is the smallest department in the university, but it is famous worldwide for its uncompromising methods, and its unforgiving attitude toward the notion of ‘mistake’. Once I started hearing stories from within this department, about mythological rivalries between scholars, stubbornness on an epic scale, eccentric professors who live with an academic mission that is bigger than life itself, even if its topic is radically esoteric, I fell in love with them all, and they became the center of this story.”

Israel’s most acclaimed (and handsome) contemporary actor, Lior Askenazi (“Walk on Water,” “The Bubble,” “Late Marriage”), grew a beard and studied Talmud for the first time in preparation of the role of a scholar who has grown up in his father’s shadow but now has eclipsed him. Stage comedian Shlomo Bar Aba came out of retirement to play the father, as serious and unfunny a man as one might ever meet. His deftly underplayed comedic touch gives his portrayal of the stubborn old man a welcome breath of humor.

The website for “Footnote” aptly describes the film as “the story of insane academic competition, the dichotomy between admiration and envy for a role model, and the very complicated relationship between a father and son.”

David Denby, writing in the New Yorker, notes that the film “requires little knowledge of Judaism and its texts. Rather, it’s about the complications of love, guilt, and rage.”

The Coen Brothers must be ticked that they didn’t think of the idea first.”

Kathryn has spent her professional life writing about, teaching, and presenting the arts. Founding Director of the Boulder Jewish Film Festival, Kathryn was Director of Menorah and ACE at the Boulder JCC from 2003 through August, 2019. The former film and theater critic for the Boulder Daily Camera, Kathryn is the author of "The Fifty Greatest Jewish Movies" and "The Fifty Funniest Films of All Time." kathryn.bernheimer@gmail.com
Previous Do a Mitzvah with Crayons to Calculators
Next Week in Review: July 13th, 2012