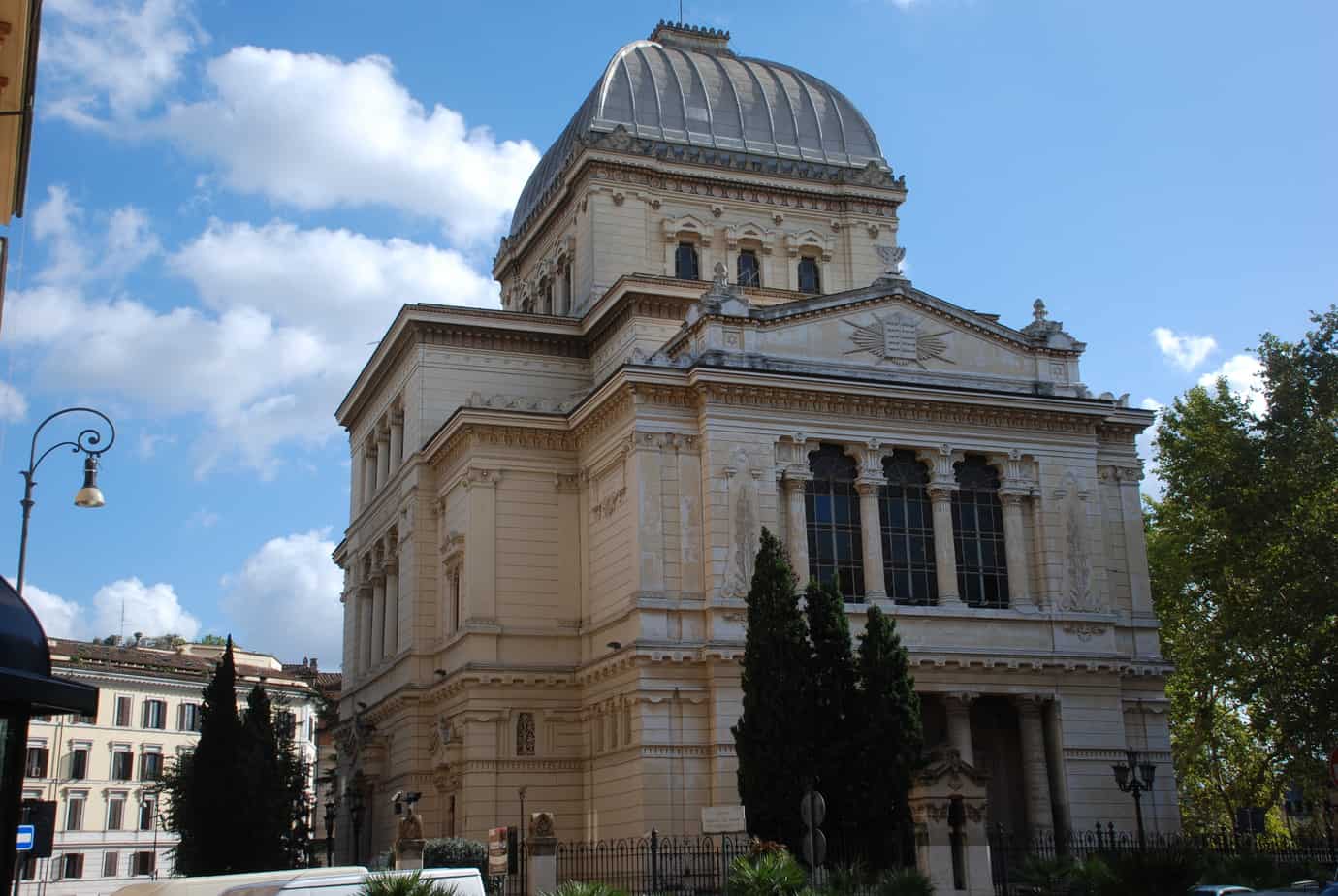 The Great Synagogue of Rome

If you’re traveling to Rome and are interested in taking a tour that focuses on Jewish culture and history, consider one of Micaela Pavoncello’s walking tours. For years, she has been organizing and leading tours pertaining to Italian Jewish history and customs with tourists from around the world.

Before traveling to Europe, I corresponded by email and then decided to book two tours: the ghetto and the catacomb tours. I recently provided an overview of both tours on my website. This article is a condensed version.

Like many other European Jewish communities, the Roman Jews were forced to live in a ghetto. In Rome, the church mandated residential and work restrictions that lasted from 1555 to 1870. The ghetto perimeter went from the Tiber River at the Tiber Island to the Ponte Quattro Capi, the Portico of Ottavia (or Fabricio), Via Portico d’Ottavia, Via Ottavia and finally to the Piazza delle Cinque Scole.

From 1886-1904, the ghetto was leveled and measures were taken to eliminate flooding.  A less dense neighborhood and a large new synagogue were constructed. The Tempio Maggiore (The Great Synagogue of Rome) was opened in 1904. Since most of the original ghetto was destroyed, there are a limited number of structures that remain. Instead, plaques recall a former place and time.

Due to security concerns, photography is not permitted in the synagogue or the museum. Disappointingly, this seems to be standard precaution at many Jewish sites.

Our first stop inside the museum was a small Sephardic sanctuary.  We sat in wooden pews as Micaela told us interesting facts about the Jewish community.

In the main part of the museum, we viewed fading black and white pictures of the interiors of the five ghetto era synagogues and vestiges of past Jewish life. Some of the displayed ritual objects are used by the community. What a wonderful way to connect the past with the present.

Upon entering the cavernous sanctuary of Tempio Maggiore, I spotted its squared dome ceiling. We could not miss the rainbow motif (a reminder of the story of Noah) at the very top or the stars (be fruitful and multiply) that covered the second tier. Massive white pillars support a balcony seating area. The bimah (stage) and the aron hakodesh (Holy Ark) have a churchlike appearance.

Micaela showed us a map that compared the modern street configurations with the congested and populated ghetto neighborhood. The differences were astounding. We walked down a few narrow streets that provided a small flavor of congested and segregated ghetto life.

The picture below shows one of the main thoroughfares of the ghetto area. The width of this modern street stands in sharp contrast to the former ghetto streets seen above.

During our London Jewish walking tour, we passed a former matzah bakery. Engravings on the building were all that remained in London. On this Roman Jewish tour, Micaela pointed out a dark tunnel that once housed a matzah bakery.

In recent years, many Jews have returned to this area. A flourishing Jewish day school is surrounded by kosher restaurants and Jewish owned shops.

Later that day, we took a step back in time by visiting the Jewish catacombs.  Dozens of catacombs have been unearthed within Rome’s metro area, but only a handful housed Jewish remains. Only one Jewish catacomb is open for private tours. A hefty fee of 275 euros discourages most from taking part in this once in a lifetime adventure.

At the designated gate, we were met by an elderly Italian caretaker who did not speak English. Sara, our guide, arrived soon thereafter. Before entering, we were handed high intensity lanterns

Today, the artificial light was needed since the original lanterns had been removed and the skylights were partially obscured.

We followed Sara and the caretaker through the maze-like tunnels. The stale air had a musty odor. On both sides of the tunnel troughs were cut into the soft volcanic rock. These burial places for Jews and pagans were used from the 3rd to the 5th centuries. Grave robbers and the expeditions in the 19th century removed all of the artifacts and almost all of the remains.

Sara periodically deciphered the Latin and Greek plaques that marked the names of the deceased. Brick was used to support part of the ancient structure.

Jewish symbols in a few places confirmed a Jewish presence.

Some signs had more than one graphic. Common pictures included- lulavs, etrogs, pomegranates, and menorahs.

The highlight of the tour was a series of colorful rooms. The decorations were more detailed and included wildlife and images of people.

The  inscriptions and the pictures have led historians to believe that some of these tunnels housed the remains of pagans. Sadly, modern graffiti etched into the colorful designs desecrated this incredible site.

In retrospect, I wish that I had taped Sara’s explanations. It was not possible to take notes or remember all of her detailed explanations.

For additional information regarding catacombs visit the International Catacomb Society and Jessica Dello Russo site. Jessica has written extensively on the Jewish catacombs in Rome.

Sandy Bornstein lived as an expat in India. Her award-winning memoir, May This Be the Best Year of Your Life, highlights what she learned as the only American teacher at an international Bangalore school. After living abroad, Sandy continues to explore the world and write about her travels. You can follow Sandy's adventures at www.sandrabornstein.com.
Previous Adventure Rabbi Lights Menorah at Copper
Next ADL Applauds Colorado Muslim Society Bus Ads