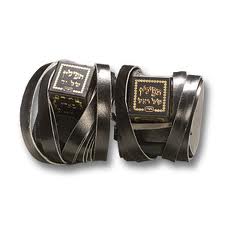 A Unique Gift This Hanukkah You might have something very powerful to give this Hanukkah. It is an object. It is in your house. It is very precious. You probably don’t ever use it. It will cost you nothing. It can change someone’s life. It’s called tefillin.

Maybe you have them because your father used to use them, and you inherited them when he died. Maybe you bought some for your son when he became bar mitzvah-ed, but now he’s got a family of his own, and it seems unlikely he’ll be using them anytime soon.

But they still have some use in them. They could make a bar-mitzvah who cannot afford his own pair, or someone who is ‘getting back into it’, very happy indeed. And this could be a very dignified way to retain the sanctity of an object your family cherishes but will not use.

Aish Kodesh will be establishing a ‘tefillin library’ of sorts – accepting donations as well as loans of tefillin sets, and also collecting funds to get them repaired and in working order. We will make known to families throughout the Jewish community of Boulder, regardless of denomination, to make tefillin available. If your family is not using those tefillin right now, but might do so on the future, please consider a loan so someone else can use them in the mean time.

By the way, if you don’t know what tefillin is, it is a set of two leather-strapped boxes containing parchments with the Shema and other Jewish prayers. For many men, and some women, tefillin is a practice that helps them connect to the Divine on a daily basis. You might have a small-ish velvet bag, perhaps with some Hebrew writing embroidered on it, about 8″ X 6″.