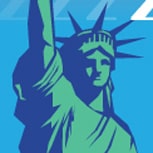 Q: Where did Walter Winchell write most of his famous columns?

A: The Stork Club. Bonus: And YES he was Jewish, born Walter Winschel. One of the most popular and controversial figures in radio and newsprint, Walter Winchell was born April 7, 1897 in New York City. Winchell left school after the sixth grade and spent several years in vaudeville as part of Gus Edwards’ “Newsboys Sextet.”  Winchell was writing a regular gossip column for the New York Daily Mirror when he made his radio debut in 1930. In an era dominated by sober analysis, Winchell was colorful, emotional, and fiercely opinionated, and his top-rated show brought him an unprecedented celebrity and power. His newspaper column was syndicated in over 2,000 newspapers worldwide, and he was read by 50 million people a day from the 1920s until the early 1960s. Winchell was one of the first commentators in America to attack Adolf Hitler and American pro-fascist and pro-Nazi organizations such as the German-American Bund. After World War II, Winchell began to denounce Communism as the main threat facing America. Walter Winchell died on February 20, 1972.

Kathryn has spent her professional life writing about, teaching, and presenting the arts. Founding Director of the Boulder Jewish Film Festival, Kathryn was Director of Menorah and ACE at the Boulder JCC from 2003 through August, 2019. The former film and theater critic for the Boulder Daily Camera, Kathryn is the author of "The Fifty Greatest Jewish Movies" and "The Fifty Funniest Films of All Time." kathryn.bernheimer@gmail.com
Previous Tisha B’Av Services
Next Shabbat in Israel: A True Break