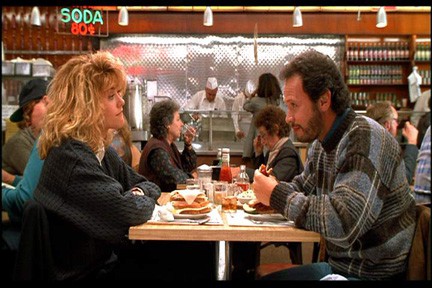 NY Trivia: I’ll Have What She’s Having

Kathryn Bernheimer September 6, 2011 Events Comments Off on NY Trivia: I’ll Have What She’s Having Q: What locale is famous for the line, “I’ll have what she’s having!” from “When Harry Met Sally” – as well as the older slogan “send a salami to your boy in the army?”

A: Katz’s Delicatessen on Houston Street, Lower East Side.

Since its founding in 1888, the quintessential deli has become popular among locals and tourists alike for its pastrami sandwiches and hot dogs, both of which are widely considered among New York’s best. Each week this kosher-style restaurant serves 5,000 pounds of corned beef, 2,000 pounds of salami and 12,000 hot dogs. Bonus: The director’s mother Estelle Reiner (wife of Carl Reiner) was given the tiny but plum role that included the response to Sally’s fake orgasm. For this infamous scene, the original script called for just Harry and Sally to talk about women faking an orgasm, until Meg Ryan suggested that Sally actually fake an orgasm at the table. Rob Reiner loved the idea and put it into the script.

Click here to watch the scene (enjoy!).  The table at which the scene was filmed now has a plaque on it that reads, “Congratulations! You’re sitting where Harry met Sally.”

Kathryn has spent her professional life writing about, teaching, and presenting the arts. Founding Director of the Boulder Jewish Film Festival, Kathryn was Director of Menorah and ACE at the Boulder JCC from 2003 through August, 2019. The former film and theater critic for the Boulder Daily Camera, Kathryn is the author of "The Fifty Greatest Jewish Movies" and "The Fifty Funniest Films of All Time." kathryn.bernheimer@gmail.com
Previous JewishGen Comes to Colorado
Next The Peaceful Storm – Update from Tel Aviv