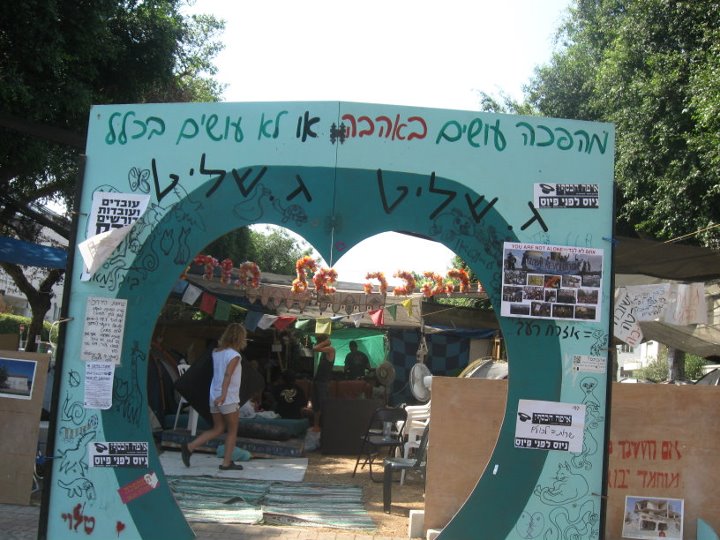 Revolution is made with love, or should not be done at all!

“Suddenly a person wakes up in the morning, feels like a nation and starts walking…” These words come from a beloved contemporary Israeli singer – Shlomo Artzi – and they have the ring of prophecy.

This summer, suddenly the Israeli people woke up like a nation. Rather than many desperate individuals glued to their TV, they chose to walk together the path of change, of a new hope for better and for more just life. Living up to the Talmudic dictate Kol Israel Arevim ze laze (All of Israel is responsible for each other), the call is for mutual responsibility, social justice and compassion.

I too joined the 1 million march (as we now know in Tel Aviv 300,000). I have never before marched with hundreds of thousands of people. I did not know what to expect. My feet walked as if on their own as people were chanting Haam Doresh Tzedek Chevrati (The people demands Social Justice).

I felt safe and excited. Safe because we were protected by thousands of friendly police and national guard soldiers, helicopters hovering over our heads and ambulances at ever corner. Excited because in spite of the masses, the energy was peaceful and purposeful, holy and whole. The crowd was mostly young people, young families, carrying signs and cheering, and some beating their drums. There were street performances explaining and promoting the cause.

When we arrived at the the town square Kikar Hamedina the excitement grew as the famous hip-hop band Dag Nachash was performing, followed by speeches of the leaders of the new movement. Dafni Leef, a 25 years old brave woman gave a beautiful speech urging the government to listen and heed to the people and calling the people to have the courage to dream for a better Israel.

One day after the march, in an interview with Stav Shafir, another beautiful social protest leader, in which she was asked whether they grew tired, she said:

The answer is that for some 50 days now we’ve been more awake than ever. This weekend we mark the 50-day anniversary of wide open eyes, voices that are hoarse from yelling and legs that are aching from marching. This road isn’t easy, yet just like the case with any good trip, where the trail may be baffling, here too it is clear to each and every marcher that the scenery at the end of the road is amazing and worth the effort.

This is where we’re going. This scenery is the new society we will and must build in the state where we grew up. We shall continue to see this scenery on the horizon and we shall keep marching until we get there…This circle will keep growing until it breaks through our government’s walls and it starts to comply with our demands.”

We walked the long way back home, along with my son and his friends, musing over the possibility of such a peaceful civil disobedience movement being created in the States. Maybe, after all, from Zion, Torah can come out and we can be a light to the nations. Ken Yehi Ratzon.

Previous NY Trivia: I’ll Have What She’s Having
Next Bringing God into the Conversation