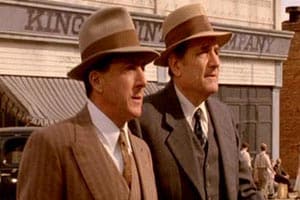 Bonus Question: Name the actors who played these notorious men.

A: They were all Jewish.

This has additional info about the history of Jewish gangsters and the role they played in fighting Nazism and the formation of Israel.

In “The Godfather” films, the character Hyman Roth, based on Meyer Lansky, was played by Lee Strasberg, nominated for best supporting actor. Patrick Dempsey plays a young Meyer Lansky with Christian Slater as his Italian partner in crime in “Mobsters.”

Michael Lerner portrayed Arnold Rothstein, the gambler who allegedly “fixed” the 1919 World Series, in “Eight Men Out.” In the HBO series “Boardwalk Empire,” Rothstein is portrayed by Michael Stuhlbarg (“A Serious Man”).

Robert DeNiro and James Woods play fictitious Jewish gangsters in Sergio Leone’s 1984 epic, “Once Upon a Time in America.”

Kathryn has spent her professional life writing about, teaching, and presenting the arts. Founding Director of the Boulder Jewish Film Festival, Kathryn was Director of Menorah and ACE at the Boulder JCC from 2003 through August, 2019. The former film and theater critic for the Boulder Daily Camera, Kathryn is the author of "The Fifty Greatest Jewish Movies" and "The Fifty Funniest Films of All Time." kathryn.bernheimer@gmail.com
Previous Week in Review: July 29th, 2011
Next Sean Guderian Bar Mitzvah