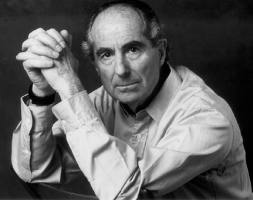 He’s been called America’s greatest living novelist, yet each of his uncomfortably candid novels has raised hackles. He’s also been called the greatest Jewish American novelist, but he rejects this mantle and is avowedly secular. In fact, he’s been called a self-hating Jew. He’s also been called misogynistic. His former wife, the British actress Claire Bloom, depicted him as “cruel, erratic and spectacularly manipulative.” His friends say they could wish for no better company. He’s famously reclusive, yet his semi-autobiographical books are shockingly revealing. He’s Philip Roth, and controversy and acclaim have dogged him at every step since the 1959 publication of his novella and short story collection, “Goodbye Columbus.” He’s close to 80, has written two dozen novels, and won every major literary award. He’s still writing and he’s still an enigma.

Saturday night at the Boulder JCC, Menorah’s our Great Books, Great Movies series continues with a discussion of Philip Roth’s life and career and a screening of “Goodbye, Columbus.”

This 1969 film starring Ali McGraw and Richard Benjamin is classic Roth – a bitterly funny examination of class, materialism and assimilation.

The discussion is at 7 pm, the film screens at 8 pm. Tickets are $15 for lecture, film and refreshments; $10 for film only. No reservations required. At the Boulder JCC, 3800 Kalmia, Boulder.

Kathryn has spent her professional life writing about, teaching, and presenting the arts. Founding Director of the Boulder Jewish Film Festival, Kathryn was Director of Menorah and ACE at the Boulder JCC from 2003 through August, 2019. The former film and theater critic for the Boulder Daily Camera, Kathryn is the author of "The Fifty Greatest Jewish Movies" and "The Fifty Funniest Films of All Time." kathryn.bernheimer@gmail.com
Previous Holocaust Era Asset Restitution Taskforce Launched
Next Purim in Africa?