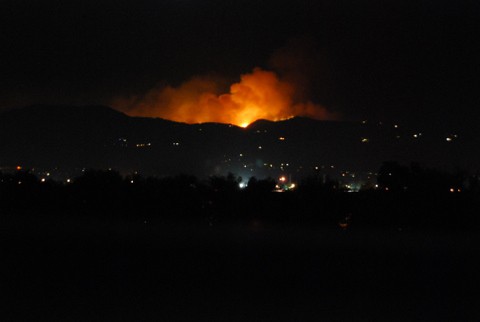 Sue Salinger September 14, 2010 Guests and Blogs Comments Off on Reportback from Tweeting #Boulderfire

This year the Days of Awe became personal for those of us in town when the #boulderfire raged.  During Elul we are called upon to reflect on our thoughts, speech and action. The liturgy is written in large part in the first person plural— ‘we’ are at the same time individuals and community, individuals and country. In my read of our tradition, the personal has in this way always been political.  Every year we are asked again to consider how each of us creates or fails to create a just society.

I am recently back in town after a year teaching social media for social change to college kids in Orlando, and the the question of community has been front and center in my mind.  I’d heard about Boulder turning its face away from strangers (homeless), and I wondered where those privileged to live in Boulder stand on the growing poverty, joblessness, foreclosures, intolerance and endless war that trouble our country. Boulder seems comfortable, and I wonder if that means we’re asleep. Are we conspiring to pretend things are fine, or, as Rabbi Tirzah Firestone asked in her Rosh Hashanah drash, is Boulder a place with a different understanding of conspiracy—are we (literally) “breathing together”? What is the state of our compassion, our ability to “fee with”? Are for ourselves, or for others?  The unusually intense events of the past week offer some illumination.

I woke Monday morning to a fire already out of control. Smoke filled my apartment, and I found no mention of the fire on tv or radio. I went online at about 11 and googled “boulder” and “fire” and discovered #boulderfire on twitter. That’s where I stayed for the next four days, online on twitter.com with over 3,990 other people who collectively posted nearly 17,000 messages (“tweets”). 2400 tweets a day. (I myself posted hundreds, and I didn’t even make the top 10.)  These messages offered information, organized aid, and put a personal and communal face on the event. Four thousand people feeling their own way through a disaster, together.  This is something new: individually experiencing a real on-the-ground event with other people through the utopia (u-topia = “no place”) of the web.

Twitter is a web-based dispatch service that connects us on our phones and computers using text, with the ability to link to websites, pictures and video. It’s been around since 2006, and its growth is astonishing. 190 million people a month used Twitter as of April, 2010. In June alone, there were 4 billion tweets—65 million per day.  Twitter becomes a social network when you decide to follow another Twitter user. That person’s tweets show up on your Twitter home page, in the same way that status updates show up on Facebook.  On Twitter, you can follow events (and themes) as well as people. Tweets are tagged and machine-sorted by content when you identify your tweet with a “hashtag”, the # sign, and follow that with a word, like this:  #boulderfire. When you search on Twitter for a term, every message similarly tagged shows up.

For the duration of the fire, twitter users voluntarily listened to scanners and provided immediate information from firefighters with messages tagged #boulderfire.  Before television and radio and Red Cross and FEMA could organize, doctoral students, journalism professors, professional bloggers, local restaurateurs and many thousands of our neighbors created a constantly moving, minute by minute and extremely personal image of the emergency situation, on their own, without any official organizer, using free, open-source technology. A beautifully anarchic collaboration.

Twitter’s been used for emergencies and breaking news events before – notably in the case of Haiti and the gulf oil spill as well as in communities of demonstration at the Democratic and Republican National Conventions, protests at global economic meetings, and during the 2009 election in Iran.    What this means for journalism is one widely debated question, but what it means for community is another, and it’s worth considering who we’re becoming as we become users of this technology that above all, lets us see and hear ourselves in relation to each other as we go about the business of everyday living. What struck me during the #boulderfire is that Twitter, of course, doesn’t help people. People help people.  This week Twitter helped people help people.

What I saw were incredibly personal calls for assistance, and an outpouring of response. During the High Holidays we’re asked to listen to the shofar, the great horn, whose purpose according to our liturgy is to open the ears of our heart, so that we can act compassionately. In the midst of the smoke and sirens, on Twitter, we all saw Boulder’s collective heart open wide.

What I saw was a community of individuals talking to strangers, opening up their homes, offering food and shelter and direct aid and assistance.  And in that conversation they became connected. Stranger became neighbor and neighbors took care of each other.  A community, feeling together, strung together electronically, each reflecting and acknowledging each other, each in conversation. Undeniably obvious was the shared sense of responsibility to each other, and the willingness to act on that.  In our tradition we have a technical term for this behavior:  acts of loving kindness. Our sages say these acts are worth everything;  they might be the whole thing.

Sometime after three days or 36 hours or so of Twitter fire coverage I  remembered what one of Boulder’s wisdom keepers, Reb Zalman often says: “The only way we’re going to get it together, is together”, and I was glad to be together with this community.

AmyIrenie:         just got pictures from my sister in boulder. ashes falling on their patio. 🙁 #boulderfire

renewabelle:       Thinking of all my Boulder-area friends tonight, sending thanks to the men and women working hard to protect them… #boulderfire

BlogLuvr29:        We need to start immediately some how set up a fund for this poor #boulderfire victims

BlogLuvr29:        We need to put into action some kind of #boulderfire fund for the victims. Who wants to help me?

Claudia_Imhoff:       Knock knock – firemen at the door. We are evacuating #boulderfire

PushUpsnPaws:     #boulderfire Have room 4 many dogs/cats if they have crates or kennels/ room for 3 horses right now

backhomeagain:     Let’s hear it for all the brave men and women who are fighting the fire in Boulder. They are amazing heroes… #boulderfire

unhealthytruth:      As my parents evacuated the #boulderfire today, it begs the question: What would you take?What really matters?

elephantjournal:     If u know of any1 needs a place 2 stay #boulderfire, friend has 3 bedroom hse in Ft Collins empty from Wed. – Sat.

epiccolorado:         #offer coupons for some free food Modmarket #contact @modmarket #info Anyone affected by the 4mile fire, email me #boulderfire

ADDcrafter:             I just found out our friends’ house is heart of the fire. All of their late son’s artwork is at the house-holding back tears. #boulderfire

andrewhyde:           #boulderfire If anyone knows of someone who needs a boatload of clothing, I start a round the world trip today- a lot to give

bldrjewishnews:     chicken soup made (finally). if you are affected by #boulderfire and need place for Rosh HaShanah dinner, dm us

picasboulder:          #boulderfire Pls help get this message 2those who need it-if u were evacuated we would like 2provide u lunch or dinner

theroseinbloom:    RT @pugofwar: If you were evacuated b/c of the #boulderfire, I’d be happy to buy you dinner or a Magic Mouse. DM me.

ashleykingsley:     @kirash4 Please let me know if there is anything I can do to help. If you need a place, our home is your home. #BoulderFire

actingupmama:     Thinking of twitter as a big web of help, support, love to extinguish #boulderfire Stay positive if you can.

TrekLightGear:      I’d say I’m amazed at the outpouring of offers and assistance from the Boulder community during #BoulderFire, but that’s why I love Boulder.

JoeySchusler:        Thanks for the support everyone.  Confirmed. House is burned. At least good to know for certain. #boulderfire http://twitpic.com/2m8d59

I'm a social justice media-maker, communications strategist, and educator. Am completing a phd in media philosophy that, among other things, examines personal and communal responsibility in the context of the information age.
Previous Boulderite on Last Summer Aliyah Flight
Next 2010 Candidates Forum Monday