In total, over 732 children made Aliyah this summer from the USA, Canada and the UK through Nefesh B’Nefesh and the Jewish Agency, continuing the trend of yearly growth in western Aliyah. In 2010, Nefesh B’Nefesh expects to bring a total of 5,000 Olim, a 20% increase from 2009.

As our ninth summer draws to an end, it is gratifying to continue to see so many families, children and young professionals choosing to make Israel their home,” said Co-Founder and Executive Director of Nefesh B’Nefesh Rabbi Yehoshua Fass. “It is especially rewarding, witnessing the arrival of so many young children who will grow up as Israelis and help shape the future of this county.”

Hundreds of families and friends as well as Israeli dignitaries gathered at Ben Gurion Airport to welcome the country’s newest citizens at the arrival ceremony. Those present included: Vice Prime Minister, Minister of Regional Cooperation and Minister of the Development of the Negev and Galil MK Silvan Shalom; Director General of the Prime Minister’s Office Eyal Gabai; Chairman of the Knesset Caucus for Western Aliyah MK Yoel Hasson; Israel’s outgoing Consul General in New York, Asaf Shariv, who returned to Israel with his family on the charter flight; Director of the English Speaking Division of the Jewish Agency, Yehuda Katz; CEO of El Al, Eliezer Shkedi; Vice Chairman of Nefesh B’Nefesh, Erez Halfon; and Co-Founders of Nefesh B’Nefesh Rabbi Yehoshua Fass and Tony Gelbart.

They call me "NewsHound IV," because I'm a clever Finnegan, sniffing out stories all over the Boulder area. I love Jewish holidays because the food is GREAT, especially the brisket. Well all the food. I was a rescue pup and glad to be on the scent!
Previous AIPAC Analyst Speaks in Boulder
Next Reportback from Tweeting #Boulderfire 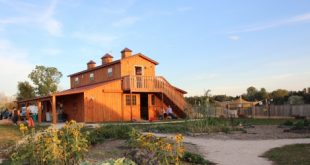 Spring is upon us and we’re looking for volunteers to help out at Milk and Honey Farm at the Boulder Jewish Community Center.