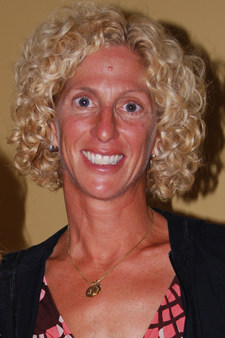 On Religion… and Athletics

Joanna Zeiger August 4, 2010 Guests and Blogs Comments Off on On Religion… and Athletics

Religion. What does it mean to you? What emotion did reading that word evoke? Did it make you wary of reading this? Religion: belief in something higher than you, war, community, discrimination, salvation, fear, morality, hatred. Think about it. What role does religion play in your life? Are you familiar with religions not your own? These are tough questions. Questions we often shy away from.

I’m Jewish. It was not always easy to verbalize, especially in a public forum. I spent my youth trying to de-emphasize my religion as it set me apart from my peer group. But, now, I rank being Jewish as the third trait with which I most identify, behind being female and an athlete. I am not highly religious. I do not attend Synagogue with any regularity. Sitting in services tests my every last nerve and I endlessly shift in my seat, counting the pages until the last prayer is completed. No, for me, the importance of being Jewish is the history, customs, and celebration. I gather my Jewish friends on the Jewish New Year and Passover and inflict upon them my terrible singing voice as I recite the prayers I learned many years ago. The evening I am writing this, we had a lovely Sabbath dinner, complete with wine and challah.

My trepidation about religion stemmed from my experiences with anti-semitism growing up. It was confusing and as a teen-ager I was not equipped to deal with this heady issue. I chose to ignore it instead, letting the remarks fester, and did my best to keep my Jewish-ness below the surface and unmentioned. I attended Brown University, which boasts a 25% Jewish student body. Inevitably, I met many Jews and slowly became more comfortable with my religion. I attended Hillel services, “The Foundation for Jewish Campus Life” at over 500 colleges and universities. I was slowly coming out of my shell.

In 1989, along with my sister, I represented the United States at the Maccabiah Games for swimming. The Maccabiah Games, the third largest world sport competition, are the Jewish Olympics and are held every four years in Israel. A very international contingent participates, with athletes competing from 50 countries. It was an amazing, life-changing experience. Prior to the opening ceremonies, US athletes from the different sports were brought together and we were broken up into small groups to discuss all matters of being a Jewish athlete. I was amazed to hear the stories from others that were similar to my own. They too, had experienced disparaging comments and felt the same shame I had at being Jewish. I shared this story:

My swim coach while growing up said “I realize your sister’s Bat Mitzvah is important, but can’t you swim on a relay?” Hmm. Do you really get it?

The most amazing part of the entire trip, though, was walking into the stadium during the opening ceremonies. I was surrounded by thousands of Jews from all over the world. And then, they played Hatikvah, the Israeli National Anthem, the words to which I knew so well from my years attending a Jewish Day School. I was overwhelmed with pride and decided I would never hide being Jewish again.

Religion. According to Wikipedia, religion is “a set of beliefs concerning the cause, nature, and purpose of the universe, especially when considered as the creation of a supernatural agency or agencies, usually involving devotional and ritual observances, and often containing a moral code governing the conduct of human affairs.” Where does religion fit into your life?

Dr. Joanna Zeiger is a professional triathlete as well as a Research Associate at CU's Institute for Behavioral Genetics. Joanna represented the US in swimming at the International Maccabiah Games in Israel in 1989 as well as in the triathlon at the 2000 Sydney Olympics, where she finished 4th. More recently, she won the 2008 Ironman 70.3 World Championship in Clearwater, Florida.
Previous 4 Questions for Photographer Israel Anderson
Next Peres Greets Flight with 85 IDF Recruits