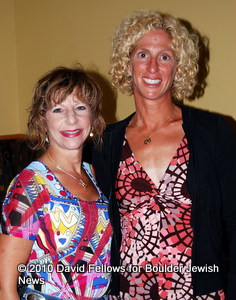 Dr. Joanna Zeiger, 2008 World Champion Ironman and Former Maccabi Games Athlete as well as the 4th place Triathlete at the 2000 Sydney Olympics, spoke to a group of fifty JCC Maccabi athletes and their Boulder Hosts Tuesday night at a private party held at Paradise Bakery on the Pearl St. Mall.  The event was organized by Boulder Maccabi host Rhonda Wildman, who wanted to give the visiting teen athletes the opportunity to meet a successful Jewish professional athlete while they were in Boulder.

Dr. Zeiger, who illustrated her talk with a slide show, told about growing up in San Diego and competing in swimming through her school years, occasionally facing anti-Semitism from team mates as well as competitors.  She also told of her experience representing the US at the International Maccabi Games in Israel in 1989, saying that just talking about the Games still gives her chills.

Zieger switched to competing in triathalons (swimming, biking and running) in the 1990’s, becoming successful enough that she was able to represent the US at the 2000 Sydney Olympics, the first Olympics that included the triathlon.  Zieger came in fourth, just missing a medal.  She told about some of her other successes, including in the Ironman form of the sport (which combines a 2.4 mile swim, a 112 mile ride and a full marathon run — 26.2 miles).  She is in fact competing this weekend in the 1/2 Ironman at the Boulder Reservoir.

After a brief question and answer period, the teens were released to spend a few hours exploring Pearl St. before going back to their hosts’ homes to prepare for their third day of competition in the 2010 Denver JCC Maccabi Games.

Earlier in the evening, two visiting Baltimore teens got a taste of the local tech startup community with a visit to the Pearl Street office of Everlater, a 2009 Techstars company. Everlater provides free blog and travel journals (online and on iPhone). Thanks for the tour!

They call me "NewsHound IV," because I'm a clever Finnegan, sniffing out stories all over the Boulder area. I love Jewish holidays because the food is GREAT, especially the brisket. Well all the food. I was a rescue pup and glad to be on the scent!
Previous GF Jews – The Perfect Challah
Next 4 Questions for Photographer Israel Anderson