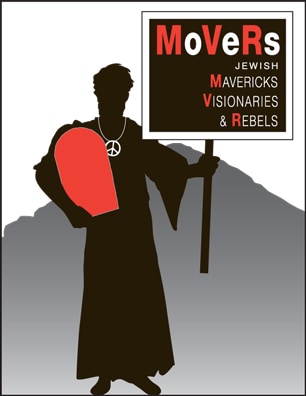 CU’s 2nd Annual Goldberger Week of Jewish Culture, presented  by the Program in Jewish Studies, incorporates the theme of MoVeRs: Jewish Mavericks, Visionaries & Rebels this year with authors, scholars and artists from around the country.

Remaining events include talks about 1930s Communist culture in the US, an exploration of Jesus and Paul as radical Jews and an examination of the lost history of Jewish anti-nationalism. The week concludes with hip-hop performances that strive to create new avenues of dialogue around issues in the Middle East. All events will take place on the CU-Boulder campus.

Events continue through Thursday – space is limited so make sure to RSVP or purchase tickets on-line at www.jewishmovers.org or call 303.492.7143.

Matthew Hoffman, assistant professor of History and Judaic Studies at Franklin & Marshall College, looks at the complexity of Yiddish-speaking American communists and how they viewed their Jewish identity in relationship to their communism. Despite their commitment to communism and opposition to Jewish particularism, the Yiddish-speaking communists created a uniquely Jewish form of communist culture.

Monday, February 22 @ 7 PM: Jesus and Paul as Radical Jews
University of Colorado at Boulder, University Memorial Center Room 235.  Free and open to the public – co-sponsored by Menorah:Arts, Culture and Education at the Boulder JCC

We all know that Jesus was Jewish, but Jews’ relationship to Jesus has been challenging, to say the least. And the apostle Paul, a Jew? Most think of Paul as the first Christian, not as a Jew at all. In this conversation, Matthew Hoffman (assistant professor of History and Jewish Studies at Franklin & Marshall College) and Pamela Eisenbaum (associate professor of Biblical Studies & Christian Origins at Iliff School of Theology), two leading Jewish Studies scholars, are in conversation with each other about the objects of each of their recent books, From Rebel to Rabbi: Reclaiming Jesus and the Making of Modern Jewish Culture by Matthew Hoffman and Paul Was Not a Christian by Pamela Eisenbaum. Authors will be available to sign books after the event.

Wednesday, February 24 @ 4 PM: The Lost History of Jewish Anti-Nationalism with Rachel Havrelock from the University of Illinois at Chicago
University of Colorado at Boulder, University Memorial Center Room 247. Free and open to the public

The Zionist movement framed the settlement of the land and the establishment of the State of Israel as a revival of ancient Jewish nationalism. And indeed, Zionist thinkers and activists relied on biblical precedents in staking their claims. However, as they drew certain stories from the Jewish past, Zionist thinkers neglected to mention other biblical traditions of anti-nationalism and multinationalism. Despite the fact that some key Zionist thinkers including Theodore Herzl, Martin Buber and Judah Magnes proposed and promoted a multinational Jewish state, such multinational traditions have been suppressed. This lecture presents the wide range of Jewish political proposals in the Hebrew Bible and in early Zionist thought. Rachel Havrelock is as professor of English and Jewish Studies at the University of Illinois at Chicago. She is a Hebrew Bible scholar whose research focuses on biblical narrative, symbolic geography and reception of the Bible. Wednesday, February 24 @ 9 PM (Doors open at 8 PM): Hip Hop Sulha – Middle East Music Meets American Hip Hop
University of Colorado at Boulder, University Memorial Center Glenn Miller Ballroom. Cost: $8 public, free for students with valid ID – tickets at www.jewishmovers.org
Presented by Soul Food and co-sponsored by the Program in Jewish Studies at the University of Colorado at Boulder, ADL, the Oreg Foundation, and Seeking Common Ground, and the Program Council at CU
Imagine a glimmering stage for dialogue through music, in context of the bleak reality of conflict and violence, and you have Hip Hop Sulha.  A stage on which American Jews, Arab-Americans and African-Americans can assert their cultural identity and opinions through poetic means and musical instruments. Middle Eastern music meets American Hip Hop in Arabic, Hebrew, and English and Yiddish. Featuring performances by Y-Love, Diwon, Yuri Lane and Sharif Ezzat. “Human Beatbox” and “Vocal Magician,” Yuri Lane presents From Tel Aviv to Ramallah, a hip-hop travelogue of peace. Part hip-hop performance, part street-wise documentary, Lane weaves a vox-pop tapestry of Palestinian and Israeli voices into a mosaic of the Middle East. Against a backdrop of muezzin calls and Tel Aviv traffic, the lives of Khalid and Amir progress with a hip-hop beat and intersect at a West Bank checkpoint. From Tel Aviv to Ramallah presents the parallel stories of Israelis and Palestinians and presents a vision of peace. Yuri Lane brings the Middle East to life through the hip-hop medium of beatbox combined with acting and dance. Sharif Ezzat accompanies Yuri with live video projections. The vision of Jewish-Arab coexistence is realized in the artistic team of Yuri and Sharif, a Jew and a Muslim who combine forces again after the success of their beatbox play Soundtrack City in San Francisco and New York.