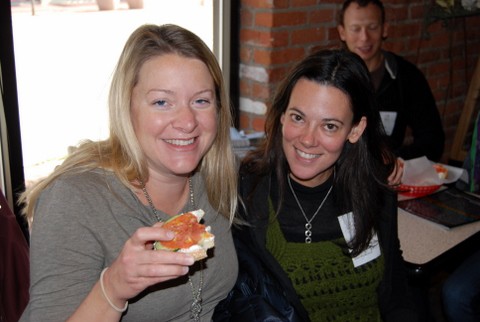 Is There Life After NYC?

We recently learned about a group meeting in Boulder . . .and we were just too curious to pass this up.  Our source told us that there were ex-New Yorkers gathering at Lindsay’s Boulder Deli for bagels and coffee, schmoozing and New York Times.

As many of you know, we’re keeping generally busy at the regularly scheduled community events (particularly with the Festival of Books and Culture the last few weeks, and zooming right along in to Chanukah).  But this sounded suspiciously like the type of gathering also near to our hearts – the grassroots kind, where people with a common interest spontaneously get something clever and fun going just . . . because.

And sure enough – we weren’t disappointed.  This group in Boulder is organized by Mari Brown and Laura Rich, and is part of a nationwide group co-founded by Mari called “Is There Life After New York?”

Is your relationship with New York… complicated? Join our online community of people who left, or are considering leaving, NYC.”

Mari came to Boulder three  years ago for a month. . . and is still here. Laura arrived just over a year ago. The group meets quarterly or so, and today included all ages and lots of families with kids. No, not everyone there was Jewish, but it definitely had a “haimishe” (translation: homey) feel.  Yes, there were copies of the New York Times (in fact, the very clever name tag prompted “Section of NYT I read first”). And yes, the fully-loaded bagels were great.

Now as for the rest of you ex-somewhere-else-people. . . Detroit, Chicago, Cleveland, Texas, Los Angeles, Bay Area. . . we could go on. . . to arrange your own get-together, contact Lindsay and she’ll get you set up.  Enjoy the photos!

They call me "NewsHound IV," because I'm a clever Finnegan, sniffing out stories all over the Boulder area. I love Jewish holidays because the food is GREAT, especially the brisket. Well all the food. I was a rescue pup and glad to be on the scent!
Previous Klezmer Crazy at the Boulder JCC
Next Italian Jewish Recipe Secrets