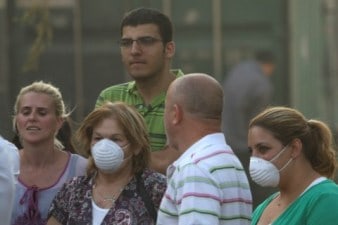 June 30, 2010 — Over 300,000 trees were destroyed in major fires that devastated Israeli forests on Tuesday. The fires burned over 750 acres of forested and open areas. A Jewish National Fund (JNF) spokesperson said that Tuesday marked the single largest day of fires in Israel since the 2006 war with Hezbollah, and that it would take 50 years to restore the forests.

Investigators say the evidence that they have found so far points to arson as the cause of many of the fires, especially the large one south of Beit Shemesh, as the fire spread from several locations simultaneously. The severe heat wave prevailing in Israel on Tuesday served to further intensify the fires and expand the total area affected.

All residents of the agricultural community Sdot Micha, located near Beit Shemesh, were evacuated from their homes and several homes reportedly burned down. Residents at the adjacent communities of Tirosh and Gefen were also evacuated. No resident was reported hurt but three fire fighters were evacuated to receive treatment for smoke inhalation.

Fires raged elsewhere across the country, including several medium-sized fires near Jerusalem and several large scale fires in the Galilee.

Despite the rapid and successful response, Israel still suffers from a lack of firefighting personnel and equipment.

Jewish National Fund (JNF) began in 1901 collecting coins in blue boxes to purchase land and return the Jewish people to their homeland. In over 108 years, JNF has evolved into a global environmental leader and become the central address for partnering with the land and people of Israel. JNF has planted 240 million trees; built over 1,000 parks and recreational areas; constructed security roads; educated students around the world about Israel; created new communities so that Jews from around the world would have a place to call home; discovered new means of growing plants under arid conditions, bringing green to the desert; and built over 205 reservoirs and water recycling centers, increasing Israel’s water supply by 12%. Today, JNF is supporting Israel’s newest generation of pioneers by bringing life to the Negev Desert, Israel’s last frontier.
A United Nations NGO, JNF sponsors international conferences on desertification, shares afforestation techniques, and funds research on arid land management. JNF is a registered 501(c)(3) organization and continuously earns top ratings from charity overseers. For more information on JNF, call 888-JNF-0099 or visit www.jnf.org.

They call me "NewsHound IV," because I'm a clever Finnegan, sniffing out stories all over the Boulder area. I love Jewish holidays because the food is GREAT, especially the brisket. Well all the food. I was a rescue pup and glad to be on the scent!
Previous IST Photo of the Day 6-30-10
Next Why Slow Reactions Aren’t Necessarily Bad