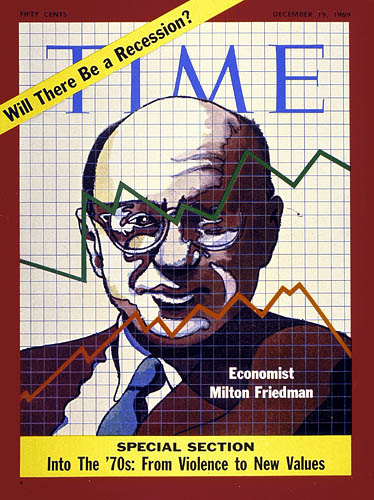 Five Reasons you want to hear about economist Milton Friedman:

1. His vision of macroeconomics is a key to understanding modern Economic thought. His prodigious research papers and books are key considerations in both furthering Keynesian and its rival neo-classical thought. His Monetarism School of Thought is the basis for much of the Federal Reserve policy actions, especially under Chairmen Allan Greenspan and the current Ben Shalom Bernanke.

2. His political views: freedom and capitalism are handmaidens to each other; there can be no free markets without free individuals; to buy a simple pencil is to consider all the thousands of freely considered economic decisions and actions across the entire world which must go on daily without explicitly guided human interaction to create that pencil. No government direction can do that across the entire economy. And, more importantly, no individual can participate in that pencil-producing process unless guided by the freedom to choose, and unless guided by their own natural need to better themselves.

3. His methodology of scientific inquiry: he used an empirical approach that also incorporated detailed historical examination of economic phenomena. This was a break with the previous mathematical delineation of economics. He used history as a laboratory. Today, almost all winning stock and bond market analysis utilizes such methodology.

4. His delineation of monetarist over fiscal governmental stabilization policy. He made the case that Monetarism was more robust in governmental policy prescriptions. It was his thesis, and he was at first very alone, but ultimately convincing to much of the economic community, that the single most important reason the 1930s Great Depression occurred was because the Fed reduced the money supply rather than expand it. That was the current Fed Chairman’s reason for TARP infusions of cash to banks in the recent 2008 crisis, which is credited with making another potential Great Depression into only a Great Recession.

5. His public policy prescriptions: In a famous letter to the newly-elected President Richard Nixon, Friedman advocated Nixon early on take the American dollar off the gold standard, which had been at $35 per ounce of gold for a long time. Nixon did not take his advice immediately, but was forced to do this by subsequent events during the later part of his administration. Friedman is also responsible for the creation of the Earned Income Credit line on your tax return since he advocated a negative income tax. Also, he was responsible for the idea of the use of school vouchers, which is used widely today.

The late Milton Friedman, who died in 2006, is widely regarded as the most influential economist of the 20th century. The impact of his ideas now and into the future is inestimable. Winner of the Nobel Prize for Economics in 1976, the Presidential Medal of Freedom and the National Medal of Science in 1988, Friedman was also a statistician, public intellectual, political advisor and writer who became a household name. The panelists will cover the enormous influence of Friedman on the conduct of monetary policy, which is key to what is happening in the economy now, and Friedman’s impact on broader policy issues, i.e., his general advocacy of creative market solutions for social problems.

Co-sponsored by Menorah and MoVeRs.

Stan Kreis has degrees in sociology, economics and accounting. Therefore he is wise, literate, financially sound and married to Kathryn Bernheimer (she would never marry anyone without such credentials). Grave marker: "the world was his oyster, unfortunately, he ate it and got stomach cramps."
Previous Megibow Team to Perform in Boulder
Next 13 Jewish Educators Receive Chidush Awards