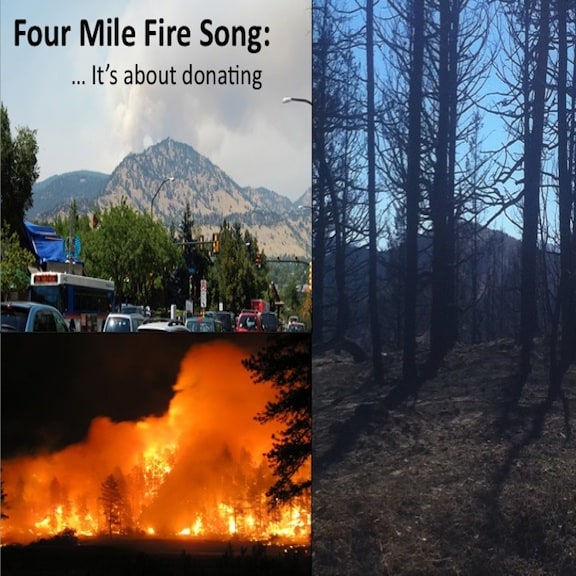 As the Boulder community continues to deal with the aftermath of the Four Mile Fire, fundraising and support has taken a musical turn. Local songwriter Steve Boorstein, also known in popular culture as The Clothing Doctor, pitched in with an original song. Profits from sales of CDs will be donated to the Firefighters and other Boulder Community funds to support those affected by the fire.  Boulder Jewish News interviews Steve in the first “4 Questions” interview of 5771.

What inspired you to get involved this way – do you have a personal connection with the fire?

I used to live in Pine Brook and was evacuated once, but I have a lot of friends in the fire zone that were evacuated; and a one that fought for their home and one that lost their home. I had a Stroke a few years back and have a have developed a deep streak of compassion and empathy for people in need. I also saw the Four Mile fire grow and felt and inhaled the smoke. It sparked something deep in me and the lyrics and melody just poured out!
.

How did the CD come together? I wrote the song in 3-4 days, refined it and polished what I had. I then went to Mark Oblinger (a great musician and singer/songwriter) and former member of the band Firefall (“You are the woman that I’ve always dreamed of …”). He took the song, rearranged the bridge and chorus, added a few lines, and then played and sang the song, which then became the final version of the song. The CD can be purchased online – click here.

When the latke falls in my lap, which is easier on my clothes – sour cream or applesauce?

The applesauce is definitely easier because it’s a water-based “acid” stain. The sour cream has fat and oil and is a protein stain. However, the oil or grease from the latke can be more difficult to remove than the applesauce. The oily part is what requires drycleaning.

You’ve been on The View – what are Joy and Meredith really like?

I liked Meredith very much. She was patient and sweet, but still a bit argumentative and slightly controlling, but that’s what it takes to run the show. Joy was very funny in the make-up room, cracking jokes, cussing, using dark language. But she was a bit difficult … everything is always about her!

Steve Boorstein is a third-generation drycleaner, now retired. He went on to write four books and to host two DVDs on clothing care. After appearances on The View, CNN, CBS and NBC, Steve and his wife, Barbara, moved to Boulder in 2006. Steve suffered a stroke in 2008, as a result of a “hit” he took on the slopes at Vail, and wrote a memoir about it (the book is with an agent in New York City). He has two grown sons and still skis and plays tennis. He continues to write more songs and more books! Steve can be reached at steve@clothingdoctor.com

They call me "NewsHound IV," because I'm a clever Finnegan, sniffing out stories all over the Boulder area. I love Jewish holidays because the food is GREAT, especially the brisket. Well all the food. I was a rescue pup and glad to be on the scent!
Previous Go Local with JNFuture
Next Going to the Ball Game