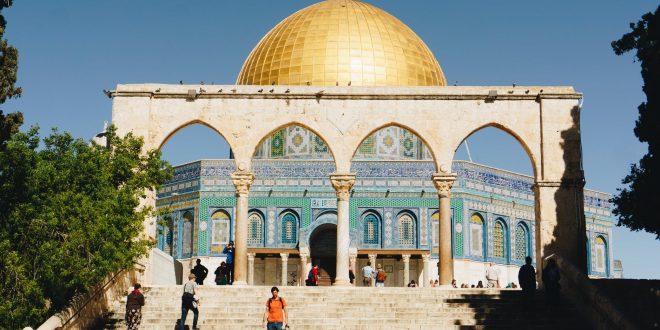 Photo by Haley Black on Pexels.com

It was the devil…er, Itamar Ben-Gvir…who made me do it.

This Ben-Gvir made me bomb buses, fire another few hundred rockets into Israel and toss rocks from the Temple Mount onto worshipers at the Wailing Wall in Jerusalem.

If such acts of terrorism materialize in the ensuing weeks, blame Ben-Gvir for trekking up to the Temple Mount in Jerusalem at seven in the morning and spending less than 15 minutes at the site – two days after his appointment as Israel’s new minister of national security. Isn’t Ben-Gvir’s visit sufficient to provoke massive violence throughout Israel and its territories?

I dread Ben-Gvir’s tenure in his new role, in which he will supervise the Israeli police, no less than I dread the possible return to the White House of Donald Trump, one of America’s worst presidents. Yet, it is ludicrous to predict that Ben-Gvir’s mere appearance at the Temple Mount can provoke a firestorm.

Ben-Gvir’s 15 minutes of infamy on January 3 were treated like an act of war by the Palestinians, some Arab nations, the United States and other Israeli allies, and even American Jews.

Overlooked in Ben-Gvir’s visit is that he did nothing more than enter the grounds for a brief period. What is more, he is officially permitted to appear at the compound under arrangements with Jordan, which is custodian of the site. Jews and non-Muslim tourists are allowed to visit, but they cannot pray there.

Is there an unwritten rule that a Jew who holds a powerful position in the Knesset, Israel’s parliament, is barred from treading on the Temple Mount’s grounds?

Ben-Gvir joined Benjamin Netanyahu’s governing coalition after the November 1 parliamentary elections, the fifth such election in nearly four years. Netanyahu invited Ben-Gvir into the coalition to consolidate majority control of the Knesset, and Ben-Gvir was fully expected to take actions that will increase tensions with the Palestinians. No wonder. He was convicted in the past of incitement to racism and support for a terrorist group; he is rigidly opposed to a two-state solution; and he supports legislation which critics believe will discriminate against the gay community.

His trip to the Temple Mount prompted the Palestinian Foreign Ministry to call it “an unprecedented provocation,” and Hamas, which controls Gaza, described it as “a detonator” that would trigger an explosion.

What a dangerous man. How can he accomplish all this? As The New York Times explains it, “The Palestinians and many Muslims in the region view such visits…as part of an effort to alter the status of the site and give Jewish worshipers more rights there. The site is revered by Jews as Temple Mount, the location of two ancient temples, and by Muslims as the Noble Sanctuary, the compound containing Al-Aqsa Mosque and other important Islamic shrines.”

Even if Ben-Gvir’s intention was to provoke violence, I would feel relieved if this was the fiercest measure of provocation that I must ever confront.

Egypt warned of the “negative repercussions of such measures on security and stability.” Such power this guy possesses. Who but Ben-Gvir can destabilize a situation by doing virtually nothing?

In December, Secretary of State Antony J. Blinken warned that the Biden administration would “unequivocally oppose any acts that undermined the prospects of a two-state solution” to the conflict. “Disruption to the historic status quo at holy sites” would constitute such an act, he said, as quoted in the Times. “Disruption” of what?

He also raises the specter of the two-state solution. Unlike Ben-Gvir, I am not adamantly against creation of an independent state for the Palestinians, though I strongly doubt it will work. Unlike many others who automatically yearn for an independent state, I believe we should be open to other options, and I can think of some.

Back in America, two Jewish editors of far different ideological stripes appear to find some common ground on the risks of Ben-Gvir’s trek to the Temple Mount.

Jonathan Tobin, editor-in-chief of the Jewish News Syndicate, focuses in an op-ed on how Ben-Gvir’s act could benefit Israel, yet he writes almost in passing, “while the stunt can certainly be considered reckless…”

Jodi Rudoren, editor-in-chief of The Forward, characterizes the incident as “Itamar Ben-Gvir’s senseless, audacious pilgrimage…to the Temple Mount/Dome of the Rock compound…”

Reckless? Senseless? Tobin and Rudoren doth protest too much.

The perspective on Ben-Gvir’s visit needs little embellishment at this point. What is the problem? He did not shove anyone or otherwise physically touch any of his detractors. He cannot control anyone’s loony or paranoid mindset. It is hardly like the assassination in Sarajevo of Archduke Franz Ferdinand of Austria in 1914 or the Nazi invasion of Poland in 1939. Or last year’s attack on Ukraine.

Ben-Gvir cannot force anyone who is offended to assail innocent people. He cannot cause the heartburn sustained by Israel’s allies or Jewish-American editors. He cannot be blamed for someone else’s reaction after he did nothing more than show up.

Bruce S. Ticker, who writes from Philadelphia, also blogs for The San Diego Jewish World and Smirking Chimp and previously for the suspended Philadelphia Jewish Voice. He was previously a reporter and copy editor for daily newspapers in eastern Pennsylvania.
Previous Weekly Edition: January 13th, 2023
Next A Harvard President’s Pogrom Warning