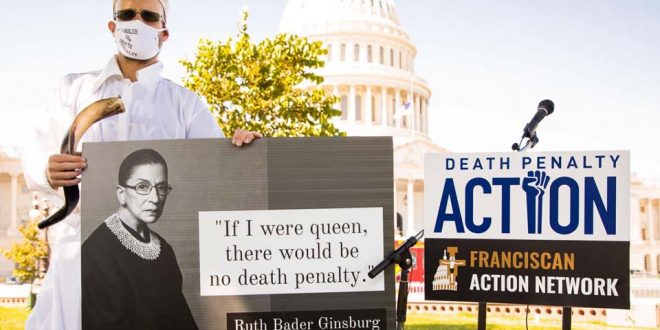 Zoosman at an anti-death penalty rally in front of Congress in September 2020 when the Trump administration went on what he calls a "federal killing spree," executing 13 people in seven months. (Courtesy Death Penalty Action)

“I felt that the people who murdered my family members deserved to die,” he said.

But thanks to a spiritual evolution that began when he was a student at Brandeis University and accelerated during a stint as a prison chaplain, Zoosman changed his mind.

In the fall of 2020, he co-founded a Facebook group, L’chaim! Jews Against the Death Penalty, that now claims about 2,000 members.

The group participates in interfaith vigils, corresponds with death row inmates, and lobbies governors and state pardon and parole boards for clemency. If a federal execution is scheduled, the group’s members write letters of appeal to the president and attorney general on the prisoner’s behalf.

“Capital punishment reveals infinitely more about the society that enacts it than the human beings it condemns,” said Zoosman, who is also a cantor and hospital chaplain and lives in College Park, Maryland.

“There is no viler marker of our society’s outright rejection of the possibility of redemption. It is a slap in the face of any spiritual, legal, or ethical tradition.”

When Prisoners Fall Through the Cracks

Zoosman’s views on the death penalty began shifting at Brandeis when a friend suffered a psychotic break, attacked a family member, and was sentenced to prison. Zoosman visited his friend regularly and helped him obtain the mental health treatment he needed.

“That opened my eyes to a whole other world, to the people who fall between the cracks of the penal and mental health systems in our country,” he said.

After graduating from the Jewish Theological Seminary of America in 2007, Zoosman became a cantor at a Conservative synagogue in Vancouver, British Columbia. During that time, he also served as the Jewish chaplain for the province’s federal prisons.

“I saw a real opportunity for healing in these places where people were often forgotten,” he said.

While many prisoners had “done horrible things and made awful decisions,” Zoosman observed their capacity for change. “And that was eye-opening,” he said. As a cantor, he often sang psalms and religious songs with prisoners.

The execution of 42-year-old Troy Davis in Georgia in 2011 was a tipping point.

Zoosman believed that Davis, convicted in the 1989 murder of a police officer, was innocent, and “that set a fire in me,” he said.

He references a quote by the medieval Jewish philosopher Moses Maimonides: “It is better to acquit a thousand guilty persons than to put a single innocent one to death.”

Another influence was Holocaust survivor and Nobel laureate Elie Wiesel’s unwavering stance against the death penalty, as well as the views of the Jewish theologian Martin Buber, who opposed even the execution of Adolf Eichmann, one of the architects of the Holocaust.

“If ‘never again’ is to have any meaning, then the lessons from the Holocaust have to be learned,” Zoosman said. “State-sponsored killing is a line that should not be crossed.”

In 2020, after 17 years without any federal executions, the Trump administration launched what Zoosman called a “federal killing spree,” executing 13 people in seven months. “I took that very personally,” said Zoosman.

Zoosman met Abe Bonowitz, co-founder and director of Death Penalty Action, at an online vigil during this period. Learning that he was a cantor, Bonowitz asked Zoosman to chant Psalm 23, with its reference to “the valley of the shadow of death.” The two men then founded the L’chaim! Facebook group together.

Zoosman conceded that the death penalty has been part of Jewish tradition and was used in ancient Israel. But in the subsequent centuries, as the rabbis debated it, the qualifications for its use were narrowed. As Zoosman sees it, capital punishment was “essentially legislated away” in Jewish law.

Redemption and a Kidney Donation

Every day, Zoosman calls governors’ offices in states with active execution warrants. He and others in L’chaim! write letters and emails to prisoners with execution dates, offering spiritual support. They also help the attorneys of death-row inmates with clemency appeals.

Zoosman’s correspondence with condemned Texas prisoner Ramiro Gonzales inspired Gonzales to offer to donate a kidney to a member of Zoosman’s synagogue. In one letter to Gonzales, who identifies as a Messianic Christian, Zoosman suggested that redemption is always possible. Zoosman said Gonzales’ offering a kidney was a “way of giving back life.”

The kidney was not a match, but Gonzales then sought to donate to a kidney bank. The Texas Board of Pardons and Paroles denied a temporary reprieve for the operation, but in July, Gonzales won a stay of execution from a Texas appeals court because of questions about the reliability of an expert witness at his trial. He remains on death row, his fate uncertain and his proposed kidney donation in limbo.

Zoosman favors a grassroots approach to abolition. That means, he said, “finding the people who agree with us and having them join us” and “changing hearts and minds.”

Every day, L’chaim! sends messages inviting Jews to join the crusade. Zoosman participates in interfaith Zoom conferences and offers sermons on Zoom to different synagogues, which he calls “confessions of a Jewish abolitionist.” 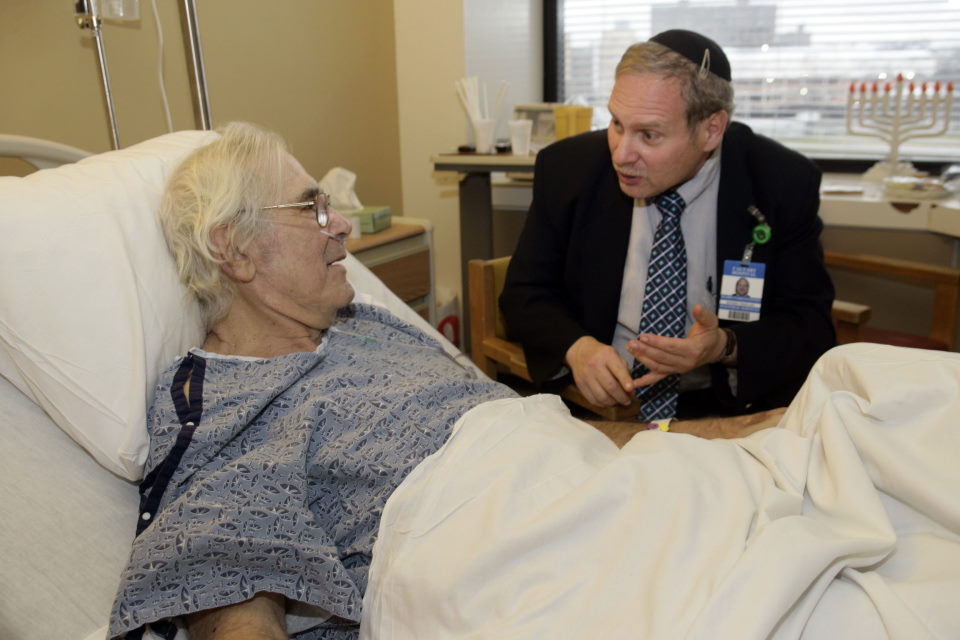 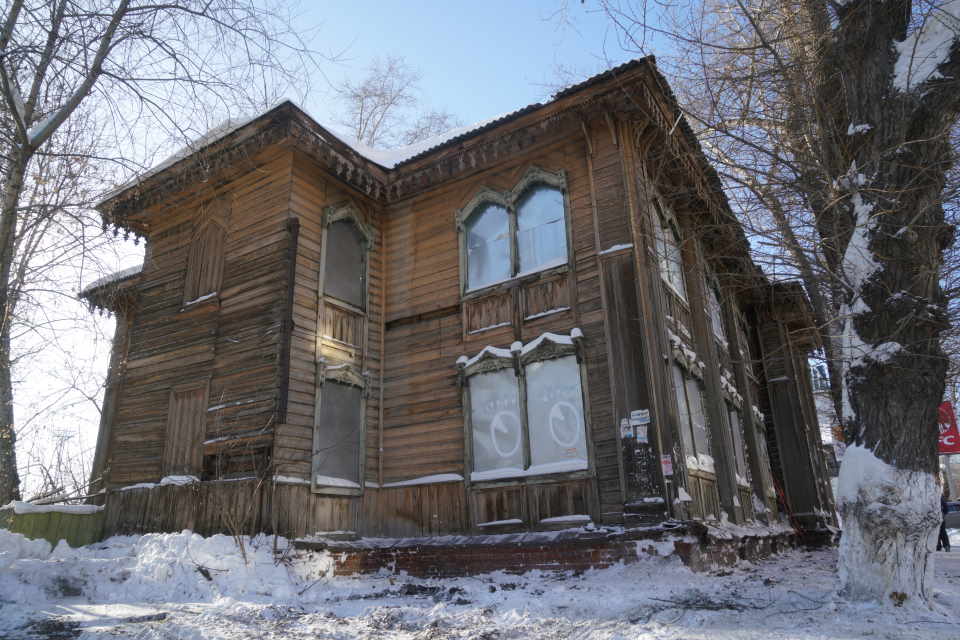 Saving the World’s Synagogues from Destruction 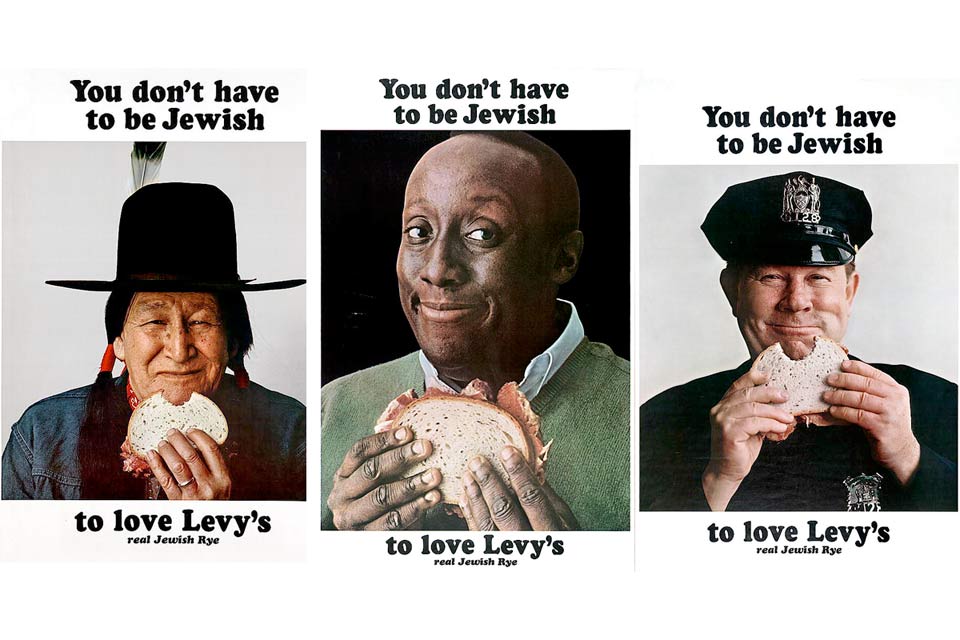