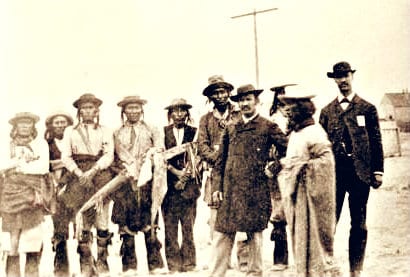 Dee Dee Diamond is the great, great grandniece of Solomon Bibo, one of the pioneers showcased in “Jews of the Wild West,” which screens on Sunday, November 13 at 3:30 in the Diary Arts Center’s Gordon Gamm Theater. Tickets are still available.

Diamond will join director Amanda Kinsey and Leadville historian Bill Korn for the post-screening Q&A and the Wild West Wrap Party that follows, 5:30-6:30 pm, in the Dairy lobby.

Solomon Bibo, who is but one of many of Diamond’s relatives who played crucial roles in the history of the Southwest, was a Jewish trader who became governor of the Acoma Pueblo, equivalent of the tribal chief. He was the only non-Native American ever to serve as a governor of an Indian Pueblo.

Diamond, who has three sisters, traces her family’s fascinating journey from Prussia to America back to 1812, when great, great, great-grandfather Lukas Rosenstein first emigrated to escape conscription in Napoleon’s army. Although Lukas eventually returned home to find a bride, never to return, all of his grandchildren eventually made their way to America.

Lukas’ eldest daughter Bluemchen had married a cantor, Isaac Bibo, and Solomon, the sixth of their 12 children, left Westphalia in 1869 at 16 to follow his two older brothers, who had established a trading post in Santa Fe. The Bibo brothers soon established stores across New Mexico.

Solomon became fascinated by the Native Americans he traded with, and married a Native American woman in 1885, with whom he had six children, all raised Jewish. While embracing his wife’s culture, he always remained true to his Jewish heritage.

Diamond is, in fact, related to Solomon on both her mother and father’s sides, since two brothers married two sisters.  She was born in Albuquerque, where her relatives settled when the train began to stop in the then remote town. They operated the flour mill and the only store, where they sold everything, including beads, fringe, and shells popular with local tribes.

“We are still friendly with the Jewish family that started the Temple,” she adds. Diamond attended CU, and when she moved to Boulder she drove to Denver’s Temple Emanuel for services.

Over the years, Diamond has encountered other descendants of early Jewish pioneers. They all have similar stories, she notes. Many recall, as she does, the uniquely Jewish experience of making matzah in an adobe oven. If she ever writes a book detailing her family’s history, “Baking Matzah in an Adobe Oven” would make fine title.

Kathryn has spent her professional life writing about, teaching, and presenting the arts. Founding Director of the Boulder Jewish Film Festival, Kathryn was Director of Menorah and ACE at the Boulder JCC from 2003 through August, 2019. The former film and theater critic for the Boulder Daily Camera, Kathryn is the author of "The Fifty Greatest Jewish Movies" and "The Fifty Funniest Films of All Time." kathryn.bernheimer@gmail.com
Previous November 16: Solutions for Inclusion in the Israel Defense Forces
Next Weekly Edition: November 11th, 2022