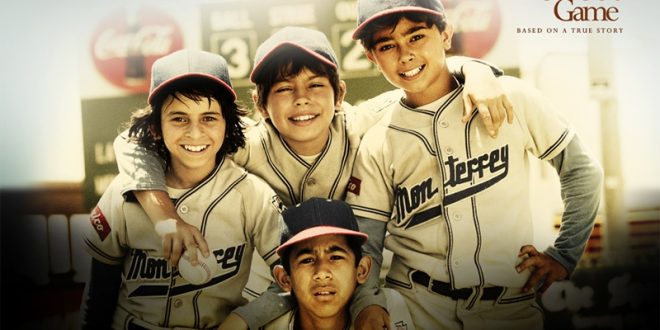 Maybe it’s just me. I have such a soft spot for kids and baseball. I guess the spot was literally imprinted when I was three years old. I was wandering around the streets of Boston near the projects I lived in when I came across a group of big boys playing some game with a ball and stick. I wanted to get a better look so when I saw an empty spot behind the burly looking kid with the stick, I bent down and surreptitiously tiptoed over to that spot. The next thing I knew, the kid who was in front of me swung his stick backwards and rammed me in the head. Miraculously it hit my left eyebrow, but thank G-d missed my eye. I still have a slight scar over seventy years later! The kids stopped playing that day, and when they saw the blood gushing down my face, they all walked me a few blocks home. Such was my introduction to the American pastime!

So when I come across a true story behind this gripping combo of kids and baseball- I can watch those films over and over. It’s almost like choreography. When a child is well trained, has practiced enough, and realizes each situation is a unique combination of many factors, then the hitter’s swing is like a piece of music, played just right with perfect timing. Or if the player is a pitcher, there is a similar sense of timing is that combines past practice and present focus. Then he or she is ready for- pun intended- the ‘perfect pitch.’ Whatever the position on (or in) the ‘field,’ there is a jaguar like poised posture right before the pitcher throws, that inwardly computes the current situation with both body and soul, and is ready to respond with the best reaction appropriate to the existing condition, and with a fierce yet pure determination.

Two of the films that I watched recently- “The Perfect Game” and “Twelve” both illustrate the magic. In “The Perfect Game,” a player was let go from his team because he was Mexican. He decides to go back to his home town, and sees a group of kids playing baseball in the streets. Someone recognizes him and asks him to be their coach. Reluctantly at first, he agrees, and whips them into a cohesive team called the Monterey Industrials. The kids’ initial inspiration comes from one of them, their hit pitcher, named appropriately enough, Angel, who decides he wants to be like Sandy Koufax! The initially grouchy coach, Caesar Fez, tells him that Koufax was a lefty…and besides he was Jewish! Eventually, the whole team, including the coach, develop greater sensitivity and awareness of racial discrimination. They even end up before a game, asking a minister to say Psalm 108 with them, because, a baseball has 108 stitches! And more important than a team rally before a game, they need to say a prayer together before they take the field!

In “Twelve,” two brothers are very good players, trained and encouraged by a devoted father. He is very focused on their success but doesn’t push them beyond their own individual interest in the sport. The youngest, Kyle, is an all-around player. He can hit and field, but did not want to pitch until he overcame his trauma about once having played as a nine year old, when he accidentally hit the kid who was up at bat, and broke his ribs. His older brother Xaviar or X as he likes to be called, practices with Kyle and reminds him to just focus on the ball like the moon in the sky. X’s girlfriend also encourages Kyle and tells him, ‘You didn’t come this far, just to come this far.’ Great line for life in general!

I find many Torah parallels with baseball. Years ago, someone asked me to explain the Kabbalistic idea of Shvirat Hakelim, the shattering of the vessels and the configuration of the sefirot, the divine attributes. I came up with an image of a baseball game where at first the nine players come out one by one, and the spotlight and the viewers are all focused on that one player. At that point the player might think that he is the main star of the entire game, but then the other players also come out one by one. However, when the game is about to start, the players need to take their individual positions on the field and in doing so, they give up the previous spotlight. My point was, unless each player was willing to leave being the center of attraction and assume his place on the field, the game can’t be played. So too before creation, each sefirah shone on its own and occupied the entire field. Each then had to be ‘shattered’ i.e. lose its ‘ego’ so to speak, to be able to work together and harmonize with all of existence. Similarly in a game, the separate players have to learn and practice how to function as a unified team. Aside from their individual skills, many sports are won primarily through group effort and ‘esprit de corps.’ And it is the work of the players and the guidance of the coach that brings this about, that turns their separate ‘I’s’ into ‘we’s.’ In the process the coach often becomes more of a mensch too!

This transformation of course also occurs with adult teams and players. After all, a game at whatever age, is still a game and adults need to draw on the kids inside themselves to enjoy the sport. However, with children the growth is more explicit and dramatic. Children may fight over fairness more than over bruised egos. In “The Perfect Game,” to borrow another Kabbalistic term, the dynamic of success is more ‘Itaruta d’ltata,’ an awakening from below. In other words, it was the kids who activated the successful coach nature within Fez.  On the other hand, in the movie “Twelve,” it’s the dedicated father who is so constantly encouraging and sacrificing his own security and profession to insure that his son will follow his dream of playing professional baseball.

In Hassidic literature, sometimes it is G-d who wakes us up, and sometimes it is we who get so stirred up that the heavens respond to our inspiration. And sometimes it can be both simultaneously. Either way, when one feels inspired to get closer to G-d, even knowing the joy may not last, it is like a baseball player who knows they can make mistakes and miss the perfect play, they realize that nothing can take away the bliss of a pitcher’s well aimed strike, a fielder’s astonishing catch, and a hitter’s grand slam home run.

Of course, it is the coach or parents who need to provide critiques and correctives when mistakes are made. Rebbe Nachman elaborates on the important idea that corrections, or Tochacha, need to come from a place of love or constructive criticism. Otherwise, the pain of the mistakes are exacerbated by the reminder of failing. Rebbe Nachman compares this to food that smells bad. If it is stirred up from a negative person, it makes the foul odor worse. But if it is handled gently by someone who wishes to not only minimize but also transmute the bad smell, then the rebuke is invigorating.

The Lubavitcher rebbe spoke about two personality types related to baseball. One is a fan and the other is a player. When a fan sees their team losing game after game, they may be discouraged and eventually switch their allegiance to another team. On the other hand, the players will keep on playing as long as they can, and their loyalty to their team will help them weather any defeat.

This year, 2022, a bronze statue of Sandy Koufax was built and placed near the statue of Jackie Robinson, who, Sandy said at the gathering, was very welcoming of him when Sandy first started playing. Both players broke through barriers- Jackie through the color barrier, and Sandy through the barrier of having to choose between loyalty to the team and loyalty to G-d when he refused to pitch the first game at the 1965 World Series, because it was Yom Kippur! His uniform number, appropriately enough was 32, the number that spells Lev, heart, in Judaism. No wonder the young boy angel in “The Perfect Game” identified so much with the amazing pitcher, Sandy Koufax- called ‘the left hand of G-d.’ After all, what other player has the divine in their nickname?

As members of ‘Team Israel,’ we are empowered to maintain our devotion to G-d, Torah, and our fellow Yidden, and rise above any obstacles in the way. In the words of Rashi, G-d is reminding us, ‘Shtori kodem,’ meaning ‘my contract came first’. When we wake up in the morning with gratitude for our lives and a brand new day, we know we won’t be perfect, but we also know wherever we go, G-d is beside us and rooting for us to take the best swing we can, whatever pitch life throws at us in any given moment. I have been in a few congregations on Rosh Hashanah and Yom Kippur where the rabbi will ‘interrupt the program’ to convey an important message- the score of the Pennant or World Series. At first this announcement may seem inappropriate for the High Holidays, but if you think more deeply, I think you can find the relevance to using those special days to ‘improve our game.’ As this Hebrew year draws to an end, may we choose well and wisely and remember who has placed us in earth’s training camp and who is cheering us on all the way, from both heaven and earth.

I have been teaching Torah and Chassidic writings for over forty years to students of all ages and backgrounds, both on the East Coast and the Midwest. I have been a director of several Jewish organizations in Santa Fe and Colorado. My articles and poetry on a wide variety of Jewish topics have been printed in many publications, and also are available online.
Previous Ella Rosenbaum Bat Mitzvah
Next PJ Library Delivers 50 Millionth Book 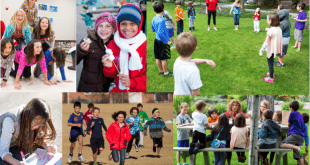 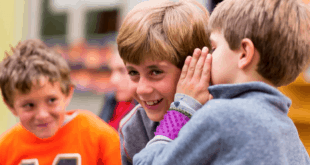 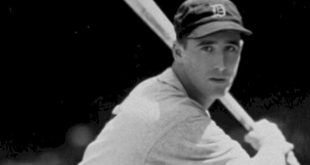 Hatred and Home Runs in the Shadow of War