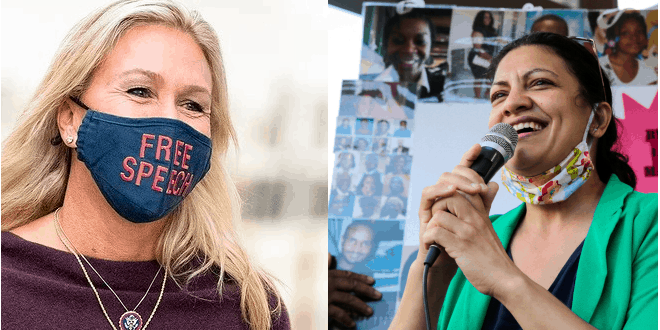 Column: Anti-Semitism Watch: A Pox on Both Parties

Bruce Ticker February 4, 2021 Guests and Blogs Comments Off on Column: Anti-Semitism Watch: A Pox on Both Parties

There are frightening people on both sides, to paraphrase a former president.

U.S. Representatives Marjorie Taylor Greene and Rashida Tlaib – each crazy in their own ways – deserve each other. None of us deserve this pair turning Capitol Hill into a psych ward. Nor do we deserve the thoughtless and senseless response of both Democrats and Republicans.

Greene and Tlaib, respectively a Republican and a Democrat, sparked squabbles invoking charges of anti-Semitism that exposed hypocrisy in the ranks of both political parties. Not that it will surprise anyone. Members of both parties have generally muzzled themselves about their own or calling out the sins of the other side.

The most frenzied clash originates from Greene’s 2018 Facebook post charging that the Rothschild banking family is linked to space lasers that possibly ignited a massive wildfire in California that killed 85 people and burned more than 150,000 acres – all to clear to clear the way for a high-speed rail line connecting Los Angeles to San Francisco.

“It also must just be a coincidence that the fires are burning in the same projected areas that the $77 billion dollar High Speed Rail Project is to be built,” she wrote, “which also happens to be Gov. Brown’s pet project,” as quoted in London’s Daily Mail.

The Rothschilds, who are Jewish, financed rail lines throughout Europe during the 19th century. Jerry Brown was California’s governor at that time.

The space-lasers theory unleashed a stream of dumb jokes in the Jewish community, but Greene has become notorious in the last week for her threatening suggestions against House Speaker Nancy Pelosi and other members of Congress, harassing an 18-year-old survivor of the Parkland school massacre and dubbing the Parkland and Sandy Hook school shootings “false flag” events.

Democrats in Congress want her expelled or at least ousted from the House Education Committee while Republicans have been slow to respond. The GOP did clamor for Greene’s defeat in her 2020 primary for her volatile comments, but gave it up after she was nominated and went on to win election in her solidly Republican northwestern Georgia district. So far, they have said little against her.

Of the two controversies, Republicans have been hammered as CNN and MSNBC relentlessly reported on all developments and newspapers carried news stories, as they should. Yet Tlaib’s accusations against Israel were barely covered, if at all, in American media. I learned most of the story from two Israeli newspapers and other Jewish media.

Tlaib and other House members blasted Israel without hesitation, falsely charging that Israel denied vaccines to the Palestinians and ignoring the revolving positions of the Palestinian Authority. All of them were unfair, but Tlaib was far brassier than the others. A Michigan native, Tlaib’s parents moved to America from Israel’s West Bank territory, where her grandmother still lives.

This episode, like others before it, produced evidence as to how the Palestinian leadership is their people’s worst enemy. Here are Tlaib’s stream-of-consciousness style comments in late January as quoted in The Jerusalem Post:

“It’s really important to understand Israel is a racist state,” she brayed, “and they would deny Palestinians, like my grandmother, access to a vaccine, that they don’t believe that she’s an equal human being that deserves to live, deserves to be able to be protected by this global pandemic.”

Even if Israel could have done more, she fails to mention that Israel vaccinated Israeli Arabs and those living in East Jerusalem in addition to Palestinian health-care workers and inmates in Israeli prisons, according to the various media reports. She continues:

Palestinians do have “access to public health” and they might have better “access to economic opportunities” had the late Palestinian leader Yasser Arafat taken seriously Israel’s offer of an independent state two decades ago. Finally:

“They have the power to distribute that vaccine to the Palestinian people, their own neighbors…feet away from where they live, many of which…could expose them and their family…It just reiterates what the Palestinian people and even human right groups have been telling us, is that this is an apartheid state.”

Under the Oslo II Accords, the authority operates its own health-system for Palestinians and opted to obtain vaccines on its own, which it has yet to receive.

In fact, the Jewish Telegraphic Agency reports, “Palestinian officials have in the past two weeks made contradictory statements as to whether the PA had asked Israel for vaccines, with its Foreign Ministry saying in one statement that Israel, as an ‘occupying power’, was obliged to provide vaccines to the Palestinians, while other officials stated that it had not requested vaccines from Israel and that the PA had even rejected vaccines that were offered to them by Israeli NGOs.”

Already this week, Prime Minister Benjamin Netanyahu announced that Israel will send the authority 20,000 doses in the coming weeks, a move which the Palestinians refused to acknowledge. Back in Washington, House Democrats were poised to kick Greene off the Education Committee, and I recall reading that some Republican proposed ousting Rep. Ilhan Omar – who rivals Rashida Tlaib in bashing Israel – from her committee memberships.

Some Democratic apologists claim that Tlaib and Omar’s attacks on Israel are not comparable to Greene’s violence-promoting outbursts. “It’s incumbent on Jewish Americans to avoid the trap of false equivalence,” writes Halie Soifer, CEO of the Jewish Democratic Council of America.

Oh yeah? Granted, Greene is worse than either Omar or Tlaib because she openly advocates violence. Does Soifer believe that their anti-Israel rhetoric has no link to violence against Jews? If that is the case, then our former president’s fiery speech, which did not specify busting into the Capitol building and killing or injuring police on Jan. 6, did not constitute incitement.

In a TV interview Wednesday night, Omar recalled numerous death threats she has received from right-wingers, noting, “They are really making it hard to survive and exist.”

Now she knows how I feel.

Bruce S. Ticker, who writes from Philadelphia, also blogs for The San Diego Jewish World and Smirking Chimp and previously for the suspended Philadelphia Jewish Voice. He was previously a reporter and copy editor for daily newspapers in eastern Pennsylvania.
Previous Weekly Edition: February 5th, 2021
Next This Weekend at Nevei Kodesh, February 5-6