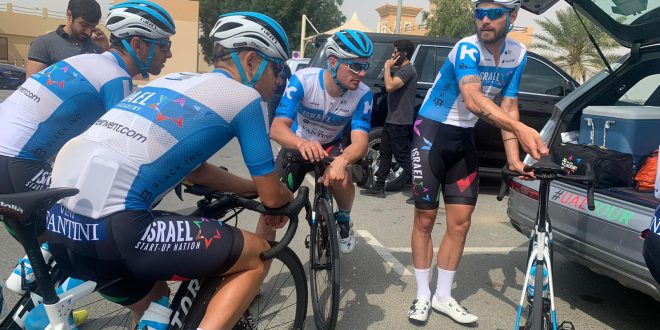 TEAM CO-OWNER, SYLVAN ADAMS IN DUBAI: “It is not an exaggeration to suggest that sport can be a force for peace, and this is one of the missions of Team ISN”

ISRAELI CYCLIST OMER GOLDSTEIN:  “This is the victory of sports over politics”

FRENCH CYCLIST RUDY BARBIER: “We are making history by racing here and it shows you that sports can break every barrier.”

Tel Aviv – Israel’s only professional cycling team, Israel Start-Up Nation, will make history on Sunday by competing in the UAE Tour, becoming the first Israeli team to participate in the Middle East’s top cycling race. The race will unfold over the next week, crossing all seven of the United Arab Emirates, from Dubai to Abu Dhabi. The race will be broadcast to a television audience across the world.

Israeli rider Omer Goldstein will be in the Israel Start-Up Nation team, alongside the team’s biggest stars, to help secure a stage win for the team.

“Competing in the UAE in the team uniform is an inspiring moment. Until recently, it would have seemed like an unrealistic dream,” said 23-year-old Goldstein. He continued, “In all honesty, I am still finding it hard to digest, but once I am on the start line, I will be fully focused on just one thing – Helping the team win.”

“For me,” added the Israeli. “This is the victory of sports, and being here is proof of that.”

Goldstein has was pleasantly surprised by the warm reception the team has received right from the start. When the team arrived at training the vastly impressive Al Qudra Cycling Park, they stumbled into surprised local cyclists. After the initial shock to see the “Israel Start-up Nation logo,” some of them waived with friendly smiles and even asked for selfies. “It was amazing,” said Goldstein. “I wish we had a cycling park like that. We need to learn from the Emirates”.

Co-owner of the Israel Start-Up Nation team, Sylvan Adams will attend the race, to witness one of the most significant moments in the team’s history. He commented,

“Team Israel Start-up Nation is excited to be competing in the UAE Tour for the first time in 2020. The participation in this race by our Israeli team in a Middle Eastern nation is emblematic of how cycling can be a force for diplomatic openness and progress. It is not an exaggeration to suggest that sport can be a force for peace, and this is one of the missions of Team ISN. Naturally, we are hoping for a good result at the UAE Tour, and hope our many fans will tune in to watch.”

The UAE Tour is the Middle East’s largest professional cycling race and the only one in the region which is part of the World Tour competition – The very highest level of the sport. Israel Start-Up Nation is competing on the World Tour for the first time this season, as one of the world’s 19 biggest professional cycling teams. As a World Tour competitor, Israel Start-Up Nation gained automatic entry to the UAE Tour, where competitors will include the world’s greatest riders such as multiple Tour de France winner Chris Froome.

Israel Start-Up Nation will make history again in June when it becomes the first Israeli team to compete in the Tour de France – the world’s third most-watched sporting event, after the quadrennial Summer Olympic Games and the soccer World Cup.

Israel Start-Up Nation will compete at the UAE Tour with several top international riders in its team. They include two former world speed record holders, Matthias Brändle from Austria and British rider Alex Dowsett. Rick Zabel, (Germany), Danny Navarro (Spain), and Rudy Barbier (France) will also join with Goldstein to complete the Israel Start-Up Nation line-up, which is aiming to win one of the race’s seven stages. Barbier, who secured Israel Start-Up Nation’s first victory of the season in Argentina, is the rider who the team will be pushing for a win. “Our goal is to help Rudy win,” said Goldstein, “I believe that we have a realistic chance, even though this is a race at the very highest level, and we will be facing some of the top sprinters in the world.” French rider Barbier said that for him, being part of the Israeli team racing in the Emirates was an extra motivation: “We are making history by racing here and it shows you that sports can break every barrier.”

The UAE Tour will begin on Sunday on the artificial island of Abu Dhabi, taking the riders on a 148-kilometer course around the city, ending at its ‘Silicon Oasis.’ During the following stages, the race will traverse the deserts and streets of all seven Emirates, before finishing in central Abu Dhabi. Israel’s first professional cycling team was established in 2015 as “Israel Cycling Academy,” including riders from Israel and abroad. The team began to compete at a higher level when Sylvan Adams joined as a co-owner alongside Ron Baron. In 2018, Adams was the driving force behind bringing the prestigious Giro d’Italia to begin in Israel – One of cycling’s three Grand Tour races. This also saw the team compete in its first Grand Tour, with Guy Sagiv becoming the first Israeli to finish such a race. The team competed again in the Giro d’Italia in 2019, with Israeli Guy Niv completing the race. Later in 2019, the team took another historic step, joining the World Tour for the first time under the name Israel Start-Up Nation, securing its place in this year’s Tour de France.

They call me "NewsHound IV," because I'm a clever Finnegan, sniffing out stories all over the Boulder area. I love Jewish holidays because the food is GREAT, especially the brisket. Well all the food. I was a rescue pup and glad to be on the scent!
Previous This Week for CU’s Jewish Buffs – 2/24
Next Are We Ready for Genetically Modified Humans? Dr. Jamie Metzl To Speak at Boulder JCC