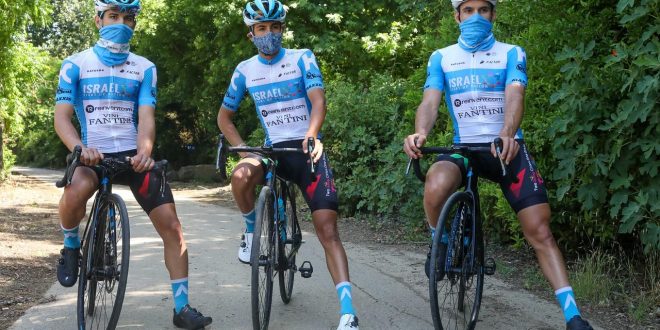 Staff May 14, 2020 News Comments Off on Israel Cycling Team First in World to Return to Training, Preparing for Tour de France

–         The team is the first on the professional tour to return to training, taking advantage of eased restrictions in Israel

–         Team owner Sylvan Adams, “We are preparing for our historic participation in the Tour de France.”

12 May (Tel Aviv) – Israel’s only professional cycling team, Israel Start-Up Nation (ISN), today began its’ first training camp since the Coronavirus outbreak, in preparation for the team’s first ever appearance in the Tour de France later this year. The three days of intensive riding in northern Israel makes ISN the first team competing at professional cycling’s highest level, the World Tour, to return to training since the pandemic brought the season to a halt.

The intensive training camp brings together more than 12 riders from ISN’s World Tour roster and its academy development squad. Riding together for the first time in more than two months, the team will conduct sprints and climbing drills. The training camp was organized after Israeli authorities lifted a number of restrictions, making it possible to undertake serious team training, in preparation for a possible resumption of the professional cycling season.

“This is a testament to the forward-looking and astute Israeli management of this pandemic and our nation’s relatively low number of cases,” said ISN team co-owner Sylvan Adams who has joined the training camp, located in Beit Hillel, northern Israel. Adams added, “We look forward to similar improvements in other countries, as we prepare for the resumption of the race season, and our historic participation in the Tour de France, a first for our Israeli team.”

The camp is being conducted under strict rules, adhering to the remaining Coronavirus restrictions. No more than twenty participants, including riders, mechanics and coaches are grouped together. Meanwhile, all participants signed a statement declaring a clean bill of health, body temperatures are regularly tested, meals are delivered in boxes and eaten according to strict social distancing, and all non-training activities such as team meetings are held outdoors. Masseurs and other therapists wear masks while treating riders.

“The team is doing its utmost to protect us,” said ISN’s Israeli climber Guy Niv, “so I feel pretty safe.” His teammate, the young Israeli sprinter Itamar Einhorn added, “Everything is much stricter. You bring your own set of bottles to the ride, and nobody else will touch them but you.”

For the riders, the training camp is an eagerly anticipated opportunity. “It is priceless,” said Guy Niv, “Being able to train together, race together in a sprint, or working on high speeds. This is something you can’t train for alone or on home trainers. It enables you to reach levels that you cannot otherwise reach”. His teammate Omer Goldstein admitted that “During the first group ride yesterday, I felt such a high it was unbelievable: it gave me a crazy boost of energy.”

During today’s second day of the training camp, the team climbed Israel’s tallest peak, Mount Hermon. Development squad team manager Aviad Izrael who oversees the camp commented afterwards, “I have never seen this kind of motivation in training before. The riders are just ecstatic. I guess that what happens after two months of Corona lockdown.”

Due to travel restrictions, this week’s camp features only Israel-based riders. Nonetheless, Team Israel Start-Up Nation views the camp as a first step towards the renewal of the season and also a possible model for its preparations under Covid-19.

“There are several hurdles to overcome before the season restarts and restrictions of movement between countries are the most crucial. It may be difficult to have full team training camps as we have riders living all over the world. We may need to build several squads based on areas and which races they are selected to compete in – and keep them together. For sure, it will be very complicated and challenging.”

Israel’s first professional cycling team was established in 2015 as “Israel Cycling Academy,” including riders from Israel and abroad. The team began to compete at a higher level when Sylvan Adams joined as a co-owner alongside Ron Baron. In 2018, Adams was the driving force behind bringing the prestigious Giro d’Italia to begin in Israel – One of cycling’s three Grand Tour races. This also saw the team compete in its first Grand Tour, with Guy Sagiv becoming the first Israeli to finish such a race. The team competed again in the Giro d’Italia in 2019, with Israeli Guy Niv completing the race. Later in 2019, the team took another historic step, joining cycling’s highest level of competition, the World Tour for the first time under the name Israel Start-Up Nation, securing its place in this year’s Tour de France.

They call me "NewsHound IV," because I'm a clever Finnegan, sniffing out stories all over the Boulder area. I love Jewish holidays because the food is GREAT, especially the brisket. Well all the food. I was a rescue pup and glad to be on the scent!
Previous Antisemitic Incidents Hit All-Time High In 2019
Next Weekly Edition: May 15th, 2020