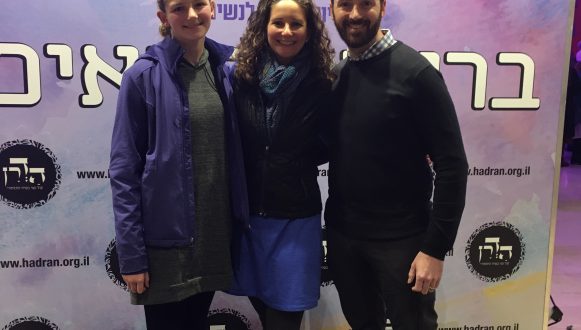 Danny completed the momentous task of reading a page of Talmud each day for the last seven and a half years. Here are his thoughts about the experience…

The past few days, I have felt surprisingly emotional.

Seven and a half years ago, I set out to learn a page of Talmud every day.  Daf yomi (“daily page”) is possibly the largest and oldest book club in the world; a discipline and a community, revolving around a cycle.  In each daf yomi cycle, Jews around the world can follow a shared schedule that starts with page 1 (actually Berachot page 2) on day one, and ends with page 2,711 (actually Niddah page 63) on day 2,711.  The 13th cycle began on Friday, August 3, 2012 and ended a couple of days ago on Saturday, January 4, 2020.

At first, I had no idea how it would be possible to participate.  I did not grow up in Yeshiva with a strong foundation in Jewish laws and biblical texts. I don’t speak Aramaic or ancient Hebrew (which are the languages of the Talmud), though my command of both has certainly improved over the years.  And I did not really have the consistent time or community to attend a daily Talmud class.  In the end, the marvels of modernity provided the tools I needed.  I relied heavily on amazing translations, like the Artscroll Talmud (my entire set of these consumes an entire large floor-to-ceiling bookshelf), and on incredible podcasts.  In particular, I regard my virtual rabbi, Rabbi Elefant of the OU, as my teacher and guide, and I hope to have the honor of meeting him someday.  He somehow managed to get through each page in its entirety within about 45 minutes, while skillfully and passionately distilling the important concepts within their context of debates, stories, and laws.  These tools have allowed the ancient Rabbis to accompany me at home and away; while exercising, walking, biking, and hiking; and while in cars, buses, trains, boats, and planes.

I began at the beginning of this cycle.  It was one day before my 35th birthday.  The London Olympics were concluding, and America was preparing for what would be the election of Barack Obama a few months later.  We had just moved into a new house in Boulder, where Karli, very pregnant with our third child, was demanding we install air conditioning.  Our oldest was about to start kindergarten at Eisenhower Elementary, the school a half-block away from our new house, and our little almost-three-year-old was toddling around and getting into trouble.  I remember remarking to Karli about how strange it was to think that, by the time I would finish the daf yomi cycle 7.5 years in the future, we would have three big kids: our kindergartener would be a post-Bat Mitzvah middle-schooler; our toddler would be a ten year-old boy; and our unborn baby would be in first grade!

Now, here we are.  So much has happened.  I have been fortunate enough to become a partner in a law firm, and even more so to have given it up for the sake of work-life balance.  I have had the privilege to teach ten courses as an adjunct professor.  I have had the merit to participate in the greatest parts of life — from walking over to eat lunch with my kids at school or taking a mid-day hike with Karli, to spending weeks at a time house-swapping in foreign countries.  And now, here I sit, writing this post in our Zichron Ya’akov apartment where we are spending this school year.  Incidentally, in Boulder, I am aware of only two people studying daf yomi: me and Rabbi Yisroel Wilhelm, who has continued to inspire me throughout this experience.  In funny contrast, in our little Israeli town, I have seen daf yomi everywhere, including even witnessing the security guard of the kids’ school (a secular public school) studying in his guard booth.

Time seems almost to bookmark the pages of the years.  I remember learning pages of Tractate Shabbat in the dim light, while trying not to wake then-baby Sarit from her cute sleeping on my stomach.  I remember one time not minding sitting in traffic because I was absorbed in esoteric laws relating to the transmission of certain impurities; and another time because I was entranced by tales of boiling waters and strange sea creatures during the flood of Noah.  I remember patiently waiting in line at a grocery store, as I listened through headphones to stories of everything from ancient lotteries and ways people attempted to game the system, to ancient medical remedies involving strange ingredients and amulets, to the gastronomic proclivities and difficulties of the High Priests of the Temple who had to eat inordinate amounts of sacrificial meat.

I remember trying to fall asleep in Iceland while listening to debates about walled cities, and walking to a coffee shop in Haifa while trying to understand the proper makeup of a high court. I remember watching the kids play on a playground in Japan, and a different time watching the kids swim in a pool in Costa Rica, while ancient Rabbis weighed preservation and respect of precedent and tradition against the need to fix laws that tend to unintentionally hurt underrepresented populations in society. I remember ironic juxtapositions, like biking in formerly-East Berlin while the Rabbis mapped out ancient theories of property damage and human worth; relaxing on the deck of a Disney cruise while the Rabbis navigated daily concerns around finding and returning lost objects; and sitting on a plane to India while the Rabbis sought to understand and avoid pagan customs and idol worship.

I imagine it has felt like a world cruise. Mostly, you are on the move; seeing the contours of the land around you, but not really having the opportunity to know any one place; occasionally, stopping at port long enough to feel the ground, smell the air, and taste the food. I am tired but inspired. The daf yomi cycle has pulled me along, mostly allowing time only for a meta-level appreciation, occasionally allowing me a peek at the genius of Rabbinic wordsmithing, advocacy, and storytelling. With infinite depths to explore on each page, I still feel almost as much a novice as when I began.  And I am eager for the opportunity to revisit with new insights and new teachers.  But that is indeed the greatest Talmudic lesson and gift of all: Hadran.  At the end of each chapter, tractate, and cycle, there is a prayer that begins “Hadran alach … v’hadran alan” (“We will return to you … and you will return to us”).  Life is a beautiful practice of discipline and persistence.  It is an opportunity to experience Now with your knowledge of Then, and to experience Later with your knowledge of Now.

In this spirit of hadran, I got to mark this accomplishment in two ways. First, hours after having completed the last page, I had the privilege and merit to learn a page of Talmud with Karli and Kayla, and to hear their insights. We learned a complex page from Tractate Menachot that tells a challenging story of Moses time-traveling into the future to visit the of study house of Rabbi Akiva, and explores what the shapes of letters in the Torah can tell us about how to live. Second, last night, I had the honor and good-fortune (also with Karli and Kayla) to participate in the first-ever women’s Siyum Ha’Shas, a celebration of finishing the Talmud daf yomi cycle. The event was sold out, but we got tickets from friends of ours, who are friends with the event coordinators. Thousands of women assembled in Jerusalem’s international convention center to celebrate the growing world of Jewish learning, including the many thousands of women who completed the daf yomi cycle for the first time. I was humbled by the learned women who spoke at the event, and by the huge number of women, many with their families and even holding small babies, who managed the time and commitment.

On the holiday of Sukkot, we are commanded to raise up and wave the four species, which includes an etrog (citron), referred to in the Torah as a “pri etz hadar” (fruit of a beautiful tree). As “my” Rabbi Elefant pointed out in his final, very emotional podcast of the daf yomi cycle, hadar (beautiful) is related to hadran (we will return). As I return through my memories of the past 7.5 years and past 2,711 pages, I remember the many feelings of raising up the fruit of a beautiful tree, and the many feelings of being raised up by the fruits of a beautiful tree. I have felt a connection to everything from its persistent roots to its transient fruits. I am overflowing with fortune to be nurtured and supported by my family and community.

Today starts the 14th daf yomi cycle. I still have not decided whether I will do it again, but I will certainly do something. I am committed to hadran. As we change, we can never truly return. But we can certainly choose how to be beautified by our past and how our past can beautify our present and our future. Way we all merit a long, beautiful, and meaningful life, surrounded by learning and nurturing from, by, and with those who challenge and love us.

This post originally appeared on the Traveling Sherwinters blog. Reposted here by permission of the author.

Previous It’s a Reder Girl!
Next HIAS Recruiting Legal Delegations to the Border