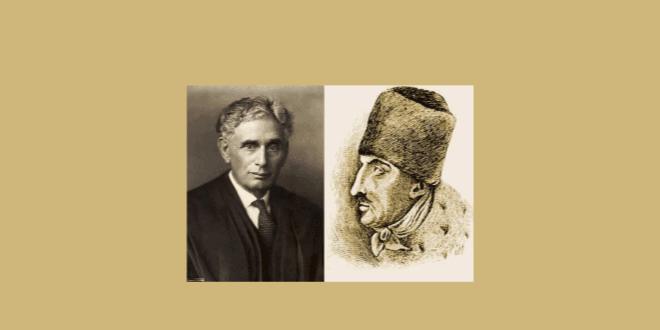 Jewish Messianic Heresy and the Right to Privacy: Louis Brandeis and the Sabbatian Origins of an American Legal Doctrine

We all know that American law protects our privacy within the home, but does it protect our emotions and personalities? Professor Nan Goodman will recover the little-known Jewish origins of the attempt by Justice Louis Brandeis to reinvent privacy law to provide just that type of protection. The first Jewish justice on the United States Supreme Court, Brandeis was profoundly shaped by his mother’s stories about growing up in Europe among modern-day followers of Sabbatai Zevi, the seventeenth-century failed messiah whose exploits rocked the Jewish world. Inspired by the lessons that his mother drew from these heretical Sabbatians, Brandeis had strong personal as well as intellectual reasons for seeking to bring human emotions and personalities within the ambit of privacy law.

Nan Goodman is the author of three books on early American law and literature: “The Puritan Cosmopolis: The Law of Nations and the Early American Imagination” (Oxford UP, 2018); “Banished: Common Law and the Rhetoric of Social Exclusion in Early New England” (University of Pennsylvania Press, 2012); and “Shifting the Blame: Literature, Law, and the Theory of Accidents in Nineteenth-Century America” (Princeton UP 1998, Routledge, 2000). She is the co-editor of two volumes, “The Routledge Research Companion to Law and Humanities in Nineteenth-Century America,” (Routledge, 2017) and “The Turn Around Religion in America: Literature, Culture” (Ashgate, 2011) and the editor of two special issues of English Language Notes: Comparative and Critical Mysticisms, Special Issue, English Language Notes, 56.1 (2018) and Juris-dictions 48.2 (2010). She has written many essays on early American literature and issues related to law and the humanities. She teaches classes on early American literature, law and literature, and Jewish Studies. She was the Director of the Program in Jewish Studies at CU Boulder from 2015 – 2018.

Previous Author Talk About the Life and Influence of Elie Wiesel
Next Weekly Edition: September 4th, 2020