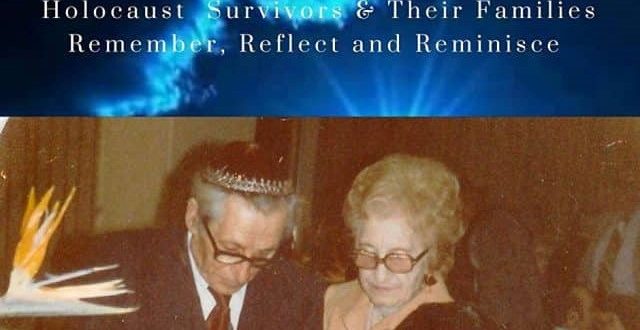 A new compilation of essays edited by Rabbi Bernhard Rosenberg, “Holocaust Survivors and Their Families: Remember, Reflect, and Reminisce,” is now available on Amazon. (Click here.)

Published “in the hope this book will help the reader understand the struggle of the Holocaust survivors and give insight to the feelings and sensitivities of their children and grandchildren,” the collection of reflections is the latest of Rabbi Rosenberg’s numerous publications, including “Theological and Halakhic Reflections on the Holocaust” and “Echoes of The Holocaust: Survivors and Their Children and Grandchildren Speak Out.” Rabbi Emeritus of Congregation Beth-El in Edison, New Jersey, Rosenberg appears frequently on radio and TV and has published hundreds of articles regarding the Holocaust.

Both my husband Stan Kreis and I were invited to submit essays, and my contribution is below.

The Moral Imperative to Enjoy a Life Spared from Destruction

I almost fell off the chair in my Jewish therapist’s office when she casually referred to a behavior I was describing as “typical of Children of Holocaust Survivors.”

It was the early ‘90s, and I was astounded to learn that I belonged to a group with identifiable psychological characteristics. I was called out, and I began a quest to discover what it meant to be the Child of Survivors that continues to this day.

I grew up keenly aware of the Holocaust that my parents had so narrowly escaped. On Kristallnacht in Munich, my father and all the Bernheimer men were rounded up in the middle of the night and sent to Dachau, where weeks of beatings and brutality would end in release, and eventually escape – flight was something still possible for people of means. My parents, whose prosperous future once seemed certain, would arrive in rural Massachusetts penniless refugees, with two young sons, to face the double curse of being German while America was at war with Germany, and Jewish in a time of widespread, accepted anti-Semitism.

In my early 40s, I discovered that psychologists had written about people like me, born into security after the Shoah, to parents profoundly impacted by their experiences. I soon met other Children of Survivors and as we shared our stories, we discovered striking similarities as well as polar-opposite differences.

During this period of personal questing, I asked my mother for details. My father – a painfully quiet man, passive and detached, but with a warm heart and European charm – declined to speak of his experience. When pressed to describe Dachau, he once replied, “I saw many beautiful sunrises there.” As a family, we took that to mean that his appreciation for beauty sustained him, and that these sustaining moments of beauty are what he chose to remember. We are, after all, a family focused on aesthetics.

I asked my mother if she thought my emotionally distanced father had been damaged by the Holocaust. Without missing a beat, she replied “No, he was damaged by his mother.” Apparently, the Holocaust was nothing compared to a domineering Jewish mother! Or so the joke went with us Bernheimers.

In truth, my mother found the humor in all circumstances, the joy in life, and pleasure in the world. It was mandatory to enjoy the life spared from destruction. That attitude was the legacy I wanted my children to inherit.

When my daughters Shayna and Naomi went to Hebrew School, I talked to other parents and teachers about the appropriate age for children to learn the horrors of the Holocaust. I felt a sense of urgency to pass along this potentially traumatizing information while my parents were still alive. I wanted my daughters to hear from my parents what they experienced as their lives were undone. I wanted them to understand what it took for them to put their life back together, and the role I played as a reward for their suffering. In their later years, my parents bonded instantly with a group of refugees who fled Germany before the camps, and formed a community based on shared history. I wanted Shayna and Naomi to understand me, and I was a child of these survivors.

I also wanted my parents to have their history heard while they could still share it, and they were already in their 80’s.  I did not want them to die without directly passing their story on, painful though it was. Although my mother lived to a one hundred and four and a half – the half is important; she’d want the credit – I am so glad that I started that conversation early. Shielding children from the brutal truth to protect them is exactly what most Survivors did in the immediate aftermath of the tragedy. Though understandable, the strategy of secrecy did not work out very well for their children, who inherited trauma they did not understand – or in many cases even know about until their parents were elderly.

My intense devotion to my mother draws from many wells, not the least of which is that I was essentially raised as an only child, my brothers long gone, with a father absent for long stretches while he worked antique shows trying to reclaim his career, in a small town with no other Jews, and no aunts or uncles, cousins or grandparents, and no neighborhood friends. But the bond this isolation produced was strengthened by my understanding, starting when I was quite young, of the suffering my parents and their families endured. I understood I was a kind of consolation prize, a victory, a life resumed.

My early knowledge of the Holocaust made me aware of many unpleasant realities. The world was a dangerous place, I learned, and security was not to be trusted. Life changes in an instant. Fortunes rise and fall. Bright futures that are built over generations turn into nightmares overnight. People hate other people simply because of who they are. Jews are not alone in a world that persecutes and stigmatizes “the other,” with no basis for the blind hatred.

This information made me take the world seriously, made me understand that threats were real and ever-present. It made me appreciate the fragility of all that makes life worthwhile. It made me feel I needed to be vigilant. It taught me to question authority, a sentiment echoed in the ‘60s era, during which I came of age.

The deepest lessons I learned were from my mother, not only because it was her narration of the family saga that was passed through the generations, but also because she set such a remarkable example. Resilience was modeled for me at a young age. Gratitude flowed freely in our household. The enjoyment of life was regarded as a moral responsibility.

As we know, there were two major theological responses to the Holocaust, as Joseph Telushkin so brilliantly illustrates in “The Quarrel.” One argument holds that God abandoned the Jews in their time of suffering, and there can be no God after the camps. The counterargument asserts that for Jews to lose the very faith that sustained them through centuries would be their final defeat – granting Hitler his wish to eradicate the Jewish people.

Similarly, some Children of Survivors inherited a legacy of trauma, mistrust, and fear. These children often felt compelled to take care of their wounded parents. Reasoning that their parents had already suffered so much, they must not cause them any more suffering through the critical, natural process of individuation. Placing parents’ emotional needs first was often crippling for these self-appointed caretakers of their damaged parents.

Thankfully, my parents embraced the narrative of resilience, telling a story of overcoming terrible times to live life fully, admonishing all of us children and grandchildren to seek out and savor the pleasures life affords. To do otherwise was a sin in our secular household.

Although I believe the trait of enthusiasm is inherited, I don’t underestimate the importance of my mother’s exuberant example. I wanted to be like her, a resourceful, vibrant, self-reliant person of principle.

There is no doubt that growing up with the knowledge that my existence owes to the narrowest of escapes from forces bent on the destruction of my family and my people has shaped my life in ways I still don’t fathom. Perhaps not coincidentally, my husband is also a Child of Holocaust Survivors, whose parents were partisans and who also strongly identifies with this special club to which we belong. We feel compelled to watch every Holocaust film in existence, not to torture ourselves, but to fully claim this history.  To look it squarely in the eye.

I have come to view my role as a Child of Holocaust Survivor as a serious responsibility – a duty but not a burden. I have a distinct perspective on life gained through the inherited experience of Nazi Germany. It is an inheritance no one asks for, but one which deserves to be embraced and even appreciated. While fully admitting that the Holocaust is beyond comprehension, that it simply beggars the imagination, as Children of Survivors we also know life is for learning.

Kathryn has spent her professional life writing about, teaching, and presenting the arts. Founding Director of the Boulder Jewish Film Festival, Kathryn was Director of Menorah and ACE at the Boulder JCC from 2003 through August, 2019. The former film and theater critic for the Boulder Daily Camera, Kathryn is the author of "The Fifty Greatest Jewish Movies" and "The Fifty Funniest Films of All Time." kathryn.bernheimer@gmail.com
Previous Weekly Edition: August 7th, 2020
Next L’Chaim – A Monthly Taste of Jewish Music from – Anywhere! 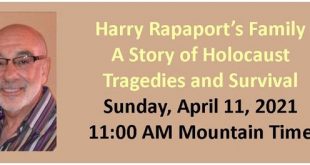 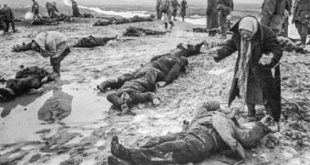