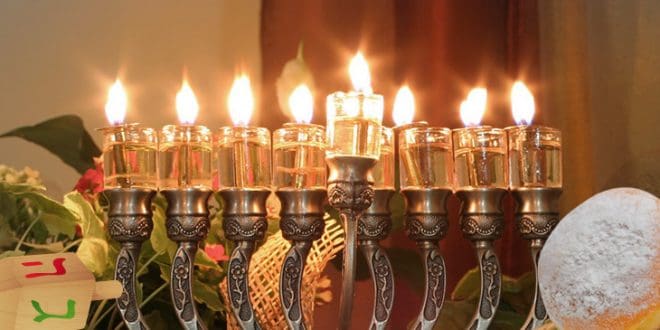 With Thanksgiving and Black Friday coming later this week and the Jewish month of Kislev underway (that’s the one with Chanukah in it), it’s safe to say that “the holidays” have begun. And with the holidays comes an incredible amount of consumption: of latkes, of turkey, of tofurkey, of all manner of cookies – and of so very many consumer goods. ‘Tis the season of abundance.

By many accounts, Chanukah is part of this litany of holidays. It’s often billed as “the Jewish Christmas,” and it’s not hard to see why: both holidays take place at the same time of year, on the 25th of a month. Both involve lights and decadent foods, and both carry a tradition of gift giving. It’s easy for people who aren’t Jewish to just pull Chanukah into the mix, and it’s easy for Jews to get swept up in the holiday spirit and superimpose it onto our celebrations.

but what if Chanukah were actually the antithesis of “the holidays” and an antidote to some of the most toxic societal messaging that we absorb on a daily basis?

This season of abundance seems to be a stark counterpoint to what Lynne Twist calls “the great lie” of scarcity that underpins our society. In her book “The Soul of Money“ she says, “For me, and for many of us, our first waking thought of the day is ‘I didn’t get enough sleep.’ The next one is ‘I don’t have enough time.’ … [T]hat thought of not enough occurs to us automatically … Before we even sit up in bed, before our feet touch the floor, we’re already inadequate, already behind, already losing, already lacking something” (43-45). Scarcity is everywhere, and it takes an intentional counter-cultural mindset to avoid it.

So what is going on? Why does a scarcity-driven society end the year with a consumption binge, and what does this have to do with Judaism?

On the surface, it’s about marketing and the corporate calendar: the holidays fall in the final quarter of the year, which is when companies sprint to make their year-end sales goals, so they drive all the sales they can. But the whole truth is deeper than that. As Brene Brown says in “Daring Greatly,” “abundance and scarcity are two sides of the same coin. The opposite of ‘never enough’ isn’t abundance or ‘more than you could ever imagine.’ The opposite of scarcity is enough …” (29).

Ah. The opposite of scarcity is enough.

And what was the miracle of Chanukah?

When we shift our gaze and start seeing Chanukah as the holiday of “enough,” everything changes. For a religion based on an agrarian calendar it makes a lot of sense to make a point of celebrating enough-ness at this time of year: the growing season is over, and it’s time to be grateful for the harvest we’ve reaped. Whatever it is, it’s enough. It is certainly easy to spin into fear and anxiety that there won’t be sufficient stores to get through the winter, but Chanukah comes and says, “No. Get out of that scarcity mindset. Celebrate all the ways in which you have enough.”

For Kira Rukin, a vegan chef and landscape architect living in Boulder, the Chanukah-as-enough mentality calls to mind the bravest thing she’s ever done.

In July 2015, she sold her 3,000 square-foot house in an affluent East Coast town and moved into a 30-foot Airstream with her three kids. After her eldest went off to college five weeks into the adventure, Kira and her two sons continued living on the road for an entire year, covering 25,000 miles and 22 states.

In preparation for the odyssey, Ms. Rukin divested herself of 75% of her belongings, a process which she describes as liberating. Her mind became clearer, she felt better and better in her space, and she loved giving things away. “Letting go of things made me happy,” she says. Now, when the holiday season rolls around, she says, “I know from experience: We don’t need.” She handles gift-giving by staying away from unnecessary stuff and tends towards experiences instead. “Gifts very rarely have to be things. They can be immaterial.”

The very visible consumption that comes with this time of year makes Ms. Rukin wish that more people knew what it feels like to disconnect from physical things. “If people simplified their material possessions, they’d free up so much mental space. With less stuff, there is more freedom.” And besides, she adds: “Why are we wasting money to do this? We could use that money to make the world a better place.”

There are many ways to observe Chanukah as a celebration of having – and being – enough.

We’re lucky to live in a community that cares about sustainability and the environment, and the Boulder JCC has a whole resource guide to crafting a sustainable celebration of Chanukah. These are just some practices you might incorporate into a Chanukah-as-enough holiday season. I encourage you to check it out and to make yourself a part of the solution.

Yael Goldfeder is a Jewish human who cares about the environment. She lives in Lafayette with her husband Bryan. (No, these Goldfeders are not related to the other Goldfeders.)
Previous Yearly Pearl Street Menorah Lighting Turns Virtual!
Next Boulder JCC Focuses on a Sustainable Chanukah