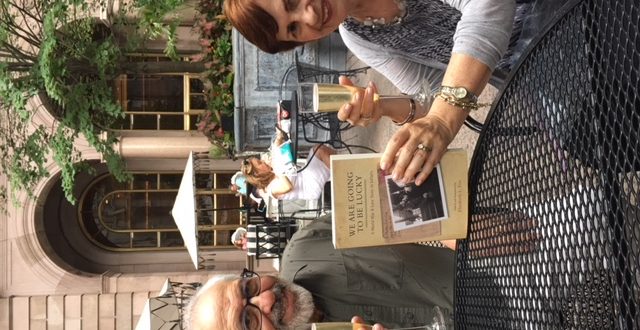 “We Are Going To Be Lucky” – A WW II Love Story in Letters, Read by Author

Sid Fox April 4, 2019 Arts & Culture Comments Off on “We Are Going To Be Lucky” – A WW II Love Story in Letters, Read by Author

Liz and I are excited to present a staged reading of excerpts from letters between Liz’s parents from her book, “WE ARE GOING TO BE LUCKY – A WW II Love Story in Letters“.  You can register at: www.harhashem.org/event/LizFox

Looking forward to seeing you there!

Sid Fox renewed his interest and study from his Hebrew School days (where he was inspired by Deborah Pessin's insightful series 'The Story of the Jewish People') when he read James Michener's "The Source". Sid eventually taught a two semester Sunday class for adults at their home when their children were at Sunday School. It was based on 15 years study of the Bible, the three hundred years of modern research and Biblical Archaeology areas he continued to pursue as he branched out to Shakespeare, the Classics and other interests.
Previous ADL Condemns Swastikas at Denver Church, Commends Police
Next Marianne Weingroff Captures the Beauty of Color, Shape with Her Camera