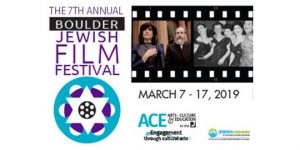 On Sunday, sponsors of the Boulder Jewish Film Festival will gather at the Boulder JCC to enjoy a champagne brunch, watch trailers of the festival films,  and get an opportunity to buy tickets before they go on sale to the general public on Monday. I also share a little about why I selected the films, which I have summarized below.

Each year, the experience of curating the festival differs based on the new work created by filmmakers around the world. Last year saw a surprising number of films focused on life in the Orthodox community, a trend that continues this year with our screenings of 93Queen – honoring Yehudis Fishman – and To Dust.

The first is directed by an observant woman, Paula Eiselt, which gave her access to the Hasidic community of Borough Park, and also made her subjects comfortable in front of her camera. She spent five years fighting to make an authentic story she says “no one wanted to tell.”

The latter, which won two top prizes at the Tribeca Film Festival, is from first-time director Shawn Snyder, who scored a coup by casting award-winning Hungarian actor Geza Rohrig in his follow-up to the stunning Son of Saul (BJFF 2015). The young director also nabbed one of the most underrated actors of his generation, Matthew Broderick, to play the secular foil to Rohrig’s widowed Hasid.

The Interpreter is also a dark comedy trafficking in the heaviest of themes. A masterpiece of modern European cinema, The Interpreter also boasts an all-star international cast. Meanwhile, American Hollywood director Chris Weitz took on the capture of Eichmann in his uncommonly intelligent all-star thriller, Operation Finale. And director Roberta Grossman and producer Nancy Spielberg continue to produce the very best Jewish-themed documentaries, once again going “above and beyond” with the inspirational Who Will Write our History?

While American and European filmmakers continue to contemplate the legacy of the Holocaust with prestige pictures such as The Interpreter and Operation Finale, others are exploring aspects of recent history that resonate today. With anti-Semitism on the rise in her native country, Austrian director Ruth Beckmann thought this was the right time to tell the incredible story of an unrepentant Nazi’s rise to power with the important Waldheim Waltz.

German director Eric Friedler and producer Wim Wenders decided that now was the time to tell the story of Blue Note Records, lionizing the two German-Jewish refugees who founded the label in New York in 1939. I found myself choking up at the Telluride Film Festival world premiere of  Schwing, and walked out determined to secure it for opening night.

I also saw What She Said at Telluride, and chased it for months despite the fact that director Ron Garver, who spent 4 years assembling his stunning tribute, does not focus on the fact that Pauline Kael was a Jewish woman who found improbable fame as the most revered film critic of her generation.

In Love, Gilda, which has enjoyed even greater success than 93Queen, director Lisa Dapolito does focus on Gilda Radner’s Jewish identity as she ably confronts all aspect of the comedienne’s complicated life.

Israeli director Ran Tal was charged with revealing nothing less than the soul of the Jewish homeland in The Museum, and was able to breathe life into an institution on its 50th anniversary.

Producer Raphael Shore and director Rebecca Shore also seek to reveal the heart of Israel through their many film projects. Dedicated to changing the way people see Israel and Judaism, they most recently produced Sustainable Nation, about Israeli advances in water technology.

Two Israeli feature films with personal concerns, Scaffolding and Outdoors, and the international English-language documentary Heading Home, also reveal the human face of Israel, furthering the festival’s mission of bringing the world to Boulder through the best in world cinema.

The mission of Peabody Award-winning director Lex Gillespie was to document Jewish participation in the 1950s mambo craze – which resulted in an album titled “Bagels and Bongos” – and his musical homage has been many years in the making, The Mamboniks.

I approach each festival with a profound sense of gratitude for the filmmakers who have put their hearts, souls, and minds into projects that illuminate the human experience. It is a privilege to share these provocative explorations with you!

Kathryn has spent her professional life writing about, teaching, and presenting the arts. Founding Director of the Boulder Jewish Film Festival, Kathryn was Director of Menorah and ACE at the Boulder JCC from 2003 through August, 2019. The former film and theater critic for the Boulder Daily Camera, Kathryn is the author of "The Fifty Greatest Jewish Movies" and "The Fifty Funniest Films of All Time." kathryn.bernheimer@gmail.com
Previous Doehring to Lecture on Moral Injury, Moral Stress
Next JCRC Opposes HHS Waiver to Allow Religious Discrimination by Foster Care Agency