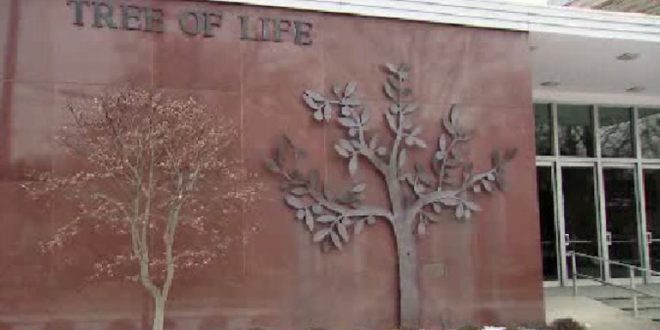 Tree of Life synagogue in Pittsburgh

PITTSBURGH, OCTOBER 18, 2019 – Nearly one year after the worst anti-Semitic attack in U.S. history that claimed the lives of 11 people worshipping inside a Pittsburgh synagogue building, the Tree of Life*Or L’Simcha Congregation announced it will move forward with rebuilding plans that reflect resiliency, strength and community collaboration.

The building, which was home to three congregations who all lost members in the attack—Tree of Life, New Light Congregation, and Congregation Dor Hadash—has not re-opened since the Oct. 27, 2018 attack. Tree of Life has since vowed to return to the building in a demonstration of its faith with a pledge to fight anti-Semitism and all forms of discrimination.

Tree of Life’s vision for the future of the property situated along Wilkins and Shady Avenues in Squirrel Hill calls for the site to be a “cooperative and collaborative space that brings together stakeholders in a shared environment that includes places for Jewish worship; memorial, education and social engagement; exhibit space for archival historical artistic expression; as well as classrooms and training spaces.”

“We are poised to become an incredible center for Jewish life in the United States. When we re-open, and we most certainly will, I want the entire world to say ‘Wow. Look at what they have done.’ To do anything less disrespects the memory of our 11 martyrs.”

“With the vision now in place, we will engage in community planning processes to determine the precise future of the building site,” said Barb Feige, executive director of Tree of Life. The vision plan was created by a steering committee co-chaired by Tree of Life members Joel Coslov and Jeff Letwin. It was shared with congregants at the Kol Nidre service the night of Yom Kippur in a speech by the synagogue’s president, Sam Schachner.

In describing the plan to eventually re-open the synagogue, Feige noted that Tree of Life intends to be patient and deliberate about planning its future. In the immediate aftermath of the attack—which left the congregation and community reeling—the focus was on the needs of the victims’ families and survivors. Finding itself in unchartered territory, the plan took time to develop as the congregation dealt with helping its congregants to heal as well as settling into new temporary space in Rodef Shalom, and the new day-to-day demands of dealing with investigators, insurers, the hundreds of requests and extensive outpouring of support from across the country and around the world.

Now, even with an infrastructure in place to help deal with what has transpired over the course of the last year, the planning phase will still take some time until the vision comes to fruition. Feige noted: “We’re redesigning our future.”

Schachner continued: “We will start by engaging in a rebuilding effort in a victim-centered, collaborative, sensitive and caring manner. We will build a cooperative and collaborative space located on the current Tree of Life*Or L’Simcha site that brings together stakeholders in a shared environment. Our buildings are too old and damaged for a narrow, limited vision. We will create a place that is alive with a balance of the future and the past; a place that has the flexibility to change with times.”

Prior to last October’s attack that rendered the synagogue unsuitable for worship, the 60-year-old building had mostly outlived its usefulness and was in need of hundreds of thousands of dollars in deferred repairs. Before the shooting, Tree of Life was already working to expand its “metropolitan model,” where three congregations shared space, expenses and programming under one roof, while retaining individual identities and assets.

“This model is now being broadened and we have developed a vision for what we’re calling a ‘Community Collaborative/Cooperative,’” said Feige.

This expanded model will include worship spaces for Tree of Life and other interested congregations, along with the Holocaust Center of Pittsburgh and Chatham University—two organizations that have signed on to explore the collaboration—along with other community stakeholders interested in renovating/rebuilding with Tree of Life. “Having the Holocaust Center and Chatham share space with us would give us an educational component that we wish to provide as well,” explained Feige.

The vision developed from the work of the steering committee through conversations with community stakeholders. Committee members met with organizations that approached Tree of Life and with entities that Tree of Life approached to determine interest in a collaboration and potential space sharing.

The vision plan also includes a memorial to the 11 lives lost last October. “We are committed to working with the victims’ families to explore this particular aspect,” Feige said. Whether the building site includes the public memorial for October 27 or a commemorative space dedicated in memory of the victims (with a public memorial located elsewhere) will be determined at a later date. Experts have advised the Pittsburgh community that planning for a physical, public memorial should proceed slowly and can take several years.

The next step, according to Feige, is to focus on a strategic plan for the campus renewal project, including the hiring of a strategic planning consultant. This consultant will have expertise in the Jewish community, and in building collaboratives and in physical plant-sharing models.

The process will also take into consideration the findings from seven “listening sessions” which were conducted with victims’ family members, witnesses, community leaders, young people and members from all three congregations. The purpose of these meetings was to share their thoughts, feelings and ideas about the future use of the building site.

Schachner noted that additional funding will be needed to achieve the vision. A fundraising consultant is expected to be on board by the end of the first quarter 2020 to plan and implement a national capital fundraising campaign. A preliminary building plan is scheduled to be completed by late spring of next year when an updated building timeline will be available. “We now have a clear step-by-step process to get to a place where we have financial stability and a vibrant community,” said Schachner.

Until then, services for Tree of Life*Or L’Simcha Congregation will continue to be held at Rodef Shalom’s Levy Hall on Fifth Avenue in the Oakland neighborhood of Pittsburgh.

When Tree of Life Congregation was formed in Pittsburgh in 1864, it was known by its Hebrew name, “Etz Chayyim.” In 1883, it bought a former Lutheran church property downtown and began going by its English name, Tree of Life. In its early years, Tree of Life was the city’s center for Orthodox Judaism, and attracted Orthodox Jewish immigrants from Eastern Europe.

In 1906, the congregation began constructing a permanent home on Craft Avenue in the Oakland neighborhood of Pittsburgh. That synagogue, built in the style of a Greek temple, opened in 1907 with sanctuary seating for 750. This building would later become the Pittsburgh Playhouse.

In 1953, Tree of Life moved into its modern, three-story stone building in Squirrel Hill. The structure initially opened with a library, kitchen, an arts and crafts store, a stage, and vestry rooms used as meeting space for Jewish and community groups. In 1959, the congregation broke ground on a 1,400-seat sanctuary featuring two banks each of seven stained-glass windows.

While the synagogue cost $600,000 to build, the land was gifted by then-synagogue president Charles J. Rosenbloom. The building was designed by architects Alfred A. Marks and Elkan A. Avner. Pittsburgh glass artist Nicholas Parrendo designed its stained-glass windows that illustrate the story of creation, the acceptance of God’s law, the “life cycle” and “how human-beings should care for the earth and one another.”

The synagogue symbolically showed its ties to Israel with a cornerstone hewn from limestone quarried in Jerusalem.

In 2010, Tree of Life merged with Or L’Simcha, a young congregation based upon conservative practices, and became known as Tree of Life*Or L’Simcha (TOLOLS) Congregation. Shortly thereafter, TOLOLS opened its doors to rent space to the Reconstructionist Congregation Dor Hadash; in 2017, they were joined by New Light Congregation. Coexisting under one roof, the three congregations retained separate identities, finances and dedicated prayer spaces, while frequently offering their congregants shared programming and holiday observances.

They call me "NewsHound IV," because I'm a clever Finnegan, sniffing out stories all over the Boulder area. I love Jewish holidays because the food is GREAT, especially the brisket. Well all the food. I was a rescue pup and glad to be on the scent!
Previous Jews Out West: Embodied Judaism Symposium and Exhibit
Next Boulder-Ramat HaNegev Sister City Celebrates 1 Year – Join Us 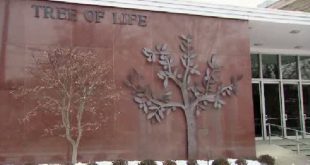 Bright City – A Poem for Our Time