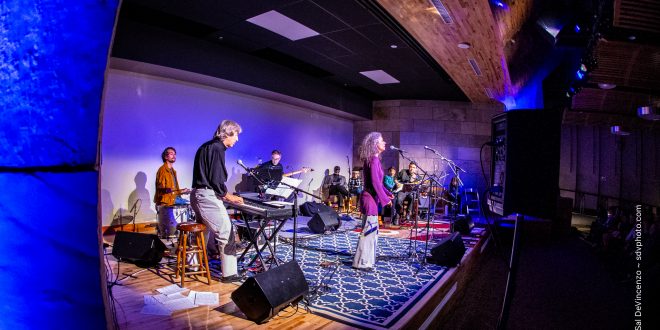 In a serendipitous coincidence of timing, ACE’s Carole King’s tribute concert took place on a day when the internet was abuzz with the news that the singer had made a surprise appearance the night before. To celebrate the fifth anniversary of the Broadway show based on her life and her music, “Beautiful,” Carole took over the role midway through the evening, playing herself for the first time – to the amazement of the audience.

Sunday morning, hours before our Music@theJ concert, King appeared on the CBS Morning Show in a retrospective piece that assessed her import in popular culture. That 7-minute episode was played onscreen prior to the concert. What a treat to see Carole King in person, interviewed just hours earlier, and what better way to convey the magnitude of this artist’s influence, which was the purpose of the concert. We knew Carole was smiling as a group of awesome musicians took to the Levin Hall stage to play their favorite songs – among the 500 or so she is credited with writing in her 60-year career. Born Carol Klein, she wrote or co-wrote 118 pop hits on the Billboard Hot 100 between 1955 and 1999, and received the Kennedy Honors in 2015.

Sheldon Sands assembled Boulder’s best musicians and singers to select and interpret songs from her vast cannon of work. Each of the singer’s selections complimented each other perfectly. Each song highlighted yet another dimension of King’s talent and personality.

Many of her most iconic songs were covered with style and heartfelt emotion, beginning with Mark Anton’s rendition of “I Feel the Earth Move,” setting the tone for an evening of songs that conveyed King’s sense of awe and wonder at life’s possibilities. BJCC Preschool teacher Leah Boonin was the first to pay tribute to King’s early, upbeat classics, with “One Fine Day” (You’re gonna want me for your girl). Later, Leland Rucker and Gil Asakawa offered up the jubilant oldies, “I’m Into Something Good” and “Take Good Care of My Baby.” Kevin Dooley also chose a piece written before her solo years, the 1962 Drifters hit, “Up on the Roof,” which she recorded in 1970, and which James Taylor recorded in 1979.

Faye Nepon dug deep in the treasure trove for the duet “Time Alone” with Chuck Stevenson, and “The Bitter with the Sweet.”

Perhaps King’s best known song, “Natural Woman,” was sung by Kathleen Sands. Written in a single night in 1967 for Aretha Franklin, the lyrics were actually composed by Carole’s writing partner and then-husband, Gerry Goffin. Ironically, this anthem of female sexuality was written by a man! Aretha performed the song at the Kennedy Honors, one of the stated highlights of King’s lifetime of awards, accomplishments, hits, tributes and acclaim. Other classics revealing King’s range and depth included “So Far Away” poignantly performed by Susan Berman, “Tapestry” sung with sweet sass by Beth Gadbow, and “Will You Still Love Me Tomorrow?” rendered with delicacy by Michelle Wolf.

After the sing-along ensemble finale of “You’ve Got a Friend,” the evening came to a lively conclusion with an encore that began with “Chains” (the 1962 hit for the Cookies, recorded by the Beatles in 1963), and ended with audience participation in “The Loco-Motion,” written by King and Goffin in 1962 and sung by their babysitter, Little Eva.

Knowing we were enjoying an evening of Carole King just as she was enjoying the national spotlight made the evening especially sweet. And the finale expresses the JCC’s mission particularly well: “You’ve Got a Friend.”

Kathryn has spent her professional life writing about, teaching, and presenting the arts. Founding Director of the Boulder Jewish Film Festival, Kathryn was Director of Menorah and ACE at the Boulder JCC from 2003 through August, 2019. The former film and theater critic for the Boulder Daily Camera, Kathryn is the author of "The Fifty Greatest Jewish Movies" and "The Fifty Funniest Films of All Time." kathryn.bernheimer@gmail.com
Previous JCC Denver Hosting Summer Camp Kick-Off
Next Salvador Dali People