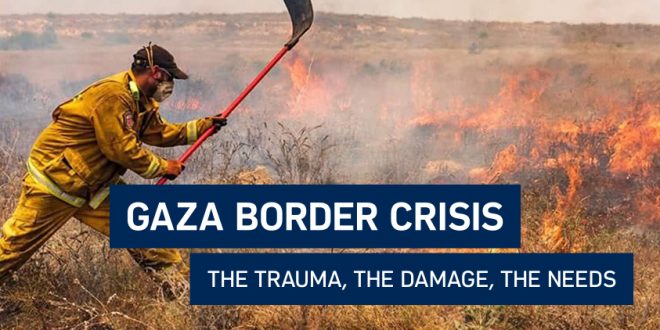 We’ve Come Too Far to Stay Silent Any Longer

Marina Brodetsky August 15, 2018 News Comments Off on We’ve Come Too Far to Stay Silent Any Longer

They say that silence is golden. Yet, now is a time that we cannot stay silent. For over four months, communities facing the Gaza border in Southern Israel have lived through a daily barrage of incendiary kites, balloons, and rockets. For these families, one night of silence would be welcome. Instead, they are woken up each night by the sound of sirens blaring as they gather their children and rush to bomb shelters. Children are afraid to take a shower in case a siren goes off. Farmers watch their livelihood burn as hundreds of thousands of dollars’ worth of crops meant to support their family are gone in an instant. This is what normal life is like for close to 30,000 people living in these communities. These are people who moved here to farm land before 1948 and others who were seeking refuge from Yemen and other Arab countries and brought in 1949 and 1950 to make a home in Southern Israel during Operation Magic Carpet. Among these communities are also families who moved during the disengagement from Gaza in 2005, who are not filled with anger, but instead they moved on to build new lives. They are filled with the passion to build the State of Israel, for the Jewish people everywhere. Modern day pioneers who see the Negev though the same eyes as David Ben-Gurion—the place that holds the future for Israel. We cannot sit silently by while thousands of men, women, and children have their physical and mental wellbeing put in jeopardy.

At Jewish National Fund we are standing up and calling attention to what has not made it into the headlines. We are gathering our voices together to share the story of these families. From August 19 through August 30, Jewish National Fund is bringing a farmer, a mother, and a student to share firsthand accounts of what life is like. The true story. This caravan will travel to communities across the United States and together we can make a sound that is louder than the sirens. Join us, invite your friends and family, share these stories on social media, and reach out to your local representatives. Together we can make sure that what is happening is no longer silent. Jewish National Fund-USA has also launched an emergency campaign to further relief efforts and support the communities affected by this terrorism. In addition to funding trauma resilience centers and the JNF Sderot Indoor Recreation Center, we are also planning to add bomb shelters, paint 20 bomb shelters already in place to make them child-friendly, provide new fire trucks and firefighting wagons, purchase life-saving equipment, and fund special activities for children of the region.

This piece originally appeared in the Times of Israel. ABOUT THE AUTHOR
Russell F. Robinson is JNF’s chief executive officer. Under his leadership, JNF has developed successful far-reaching programs that play a significant role in the quality of life for all Israelis, such as community development, environmental work, sustainable development of the Negev, and solutions for Israel’s water crisis.