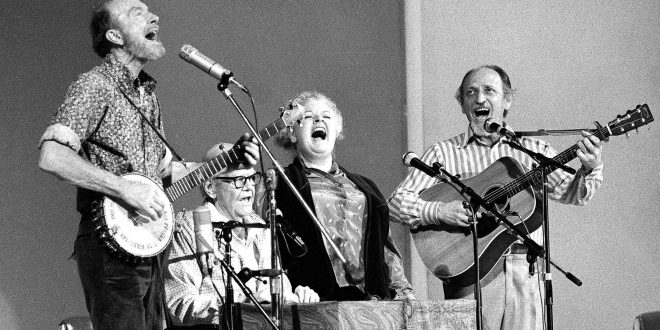 FILE - In this Nov. 28, 1980, file photo, the Weavers perform in a 25th Anniversary reunion concert at Carnegie Hall in New York. From left are: Pete Seeger, Lee Hays, Ronnie Gilbert and Fred Hellerman. The Federal Bureau of Investigation released more than 1,700 pages of documents about Seeger after the folk singer died at age 94, in January 2014. (AP Photo/Richard Drew, File)

The Hootenanny Makes a Comeback at the Boulder JCC

Kathryn Bernheimer January 18, 2018 Arts & Culture Comments Off on The Hootenanny Makes a Comeback at the Boulder JCC

For those of you old enough to remember – and those of us old enough to have forgotten how to spell it –  hootenanny was the term for a gathering of folk musicians. According to Pete Seeger, he first heard the term in the late 1930s, applied to music fundraisers for a political club. He, along with Woody Guthrie, borrowed the word for their weekly rent parties, which featured many notable folksingers of the time. In a 1962 interview in Time, Joan Baez explained that a hootenanny was to folk what the jam session was to jazz. During the early 1960s, a Greenwich Village folk club started offering a weekly hootenanny that featured an open mic and welcomed performers known and unknown, young and old.

Such is the history of the humble hootenanny, which will be celebrated on stage at Sunday’s music@theJ concert. Sheldon Sands has assembled some of the area’s best musicians to perform songs from these early years of folk, when the Weavers threw back their heads and sang with gusto. More than a concert, ACE’s Hootenanny places music into cultural context, helping audiences understand what these songs expressed at a specific moment in history. Woody Guthrie, you may be surprised to discover, had a Jewish wife – and an influential Yiddish poet for a mother-in-law – and wrote klezmer music. You’ll hear those songs playing in Levin Hall before the concert. The undisputed progenitor of folk music, Woody Guthrie influenced a generation of musicians, culminating when singers such as Dave Van Ronk began to rule a cool new coffee house scene that Bob Dylan was about to blow wide open.

Although Joan, Judy and Joni went on to “play for fortunes and those velvet curtain calls,” our exploration ends before folk went pop. Join us as we tribute the pioneers of folk.

Kathryn has spent her professional life writing about, teaching, and presenting the arts. Founding Director of the Boulder Jewish Film Festival, Kathryn was Director of Menorah and ACE at the Boulder JCC from 2003 through August, 2019. The former film and theater critic for the Boulder Daily Camera, Kathryn is the author of "The Fifty Greatest Jewish Movies" and "The Fifty Funniest Films of All Time." kathryn.bernheimer@gmail.com
Previous Jewish Researchers Led the Way in Bio-Tech Development in 2017
Next Baruch Dayan Ha’emet: Yaakov “Koby” Gruenwald, z”l