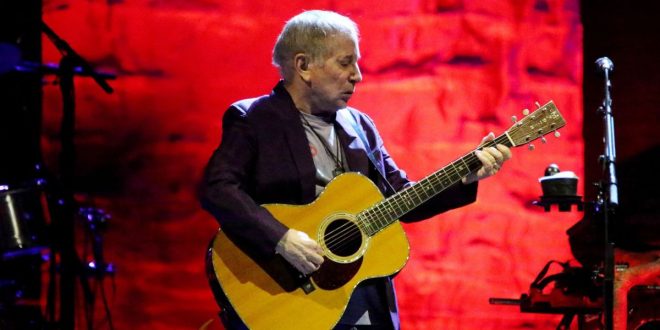 Paul Simon Comes to Fiddler’s Green – and the Boulder JCC

Paul Simon – who plays Fiddler’s Green on May 30 as part of the farewell concert tour that launches on May 16 in Vancouver before heading across North America, the U.K. and Europe – will be given a fond farewell at the Boulder JCC on Thursday, May 17.  Simon, of course, will not be here in person, but very much in spirit, for the JCC’s tribute concert.Planned long before Simon announced his decision to retire, “Kodachrome: The Paul Simon Tribute Concert” is the final music@theJ concert of the season. Produced by Sheldon Sands, ACE’s tribute concerts have become a popular community celebration, bringing together dozens of local musicians. Tributes to Bob Dylan and Leonard Cohen were met with enthusiasm, and next year Carole King will be honored. Showcasing not only Paul Simon’s most durable contributions to pop music, the evening will explore his impact, particularly his influential recognition of world music.

One of the defining musicians of his generation, rhymin’ Simon recently began performing his own Big Gig, performing hits from as early as his Simon & Garfunkel days through his solo records from 1972 to present. Clearly retirement was already on his mind. Expect the same, minus Paul Simon himself, as area musicians pay tribute to one of the most innovative, mature and literate singer-songwriters of his era. His early music spoke to the concerns and uncertainties of a generation, and later focused on the personal rather than the larger world, but he also vastly expanded his musical palette, and helped introduce many rock and pop fans to world music.

READ THE STATEMENT ISSUED BY SIMON EXPLAINING HIS REASONS FOR LEAVING THE ROAD:

“I’ve often wondered what it would feel like to reach the point where I’d consider bringing my performing career to a natural end,” the 76-year-old singer/songwriter said in a statement on his website. “Now I know: it feels a little unsettling, a touch exhilarating, and something of a relief.

“I love making music, my voice is still strong, and my band is a tight, extraordinary group of gifted musicians. I think about music constantly. Sadly, we lost our lead guitarist and my friend of 30 years, Vincent N’guini, who died last December. His loss is not the only reason I’ve decided to stop touring, but it is a contributing factor. Mostly, though, I feel the travel and time away from my wife and family takes a toll that detracts from the joy of playing. I’d like to leave with a big Thank You to the many folks around the world who’ve come out to watch me play over the last 50 years.

“After this coming tour, I anticipate doing the occasional performance in a (hopefully) acoustically pristine hall, and to donate those earnings to various philanthropic organizations, particularly those whose objective is to save the planet, ecologically.

“Once again, I am very grateful for a fulfilling career and, of course, most of all to the audiences who heard something in my music that touched their hearts.”

Simon’s philanthropic work includes the co-founding of the Children’s Health Fund (CHF), which donates and staffs 53 mobile medical units that bring health care to low-income children and their families in urban and rural locations around the United States. Since its inception in 1987, CHF has provided more than 3 million doctor/patient visits.

Kathryn has spent her professional life writing about, teaching, and presenting the arts. Founding Director of the Boulder Jewish Film Festival, Kathryn was Director of Menorah and ACE at the Boulder JCC from 2003 through August, 2019. The former film and theater critic for the Boulder Daily Camera, Kathryn is the author of "The Fifty Greatest Jewish Movies" and "The Fifty Funniest Films of All Time." kathryn.bernheimer@gmail.com
Previous Eve Jacqueline Shoenfeld Bat Mitzvah
Next Boulder Community Purim Carnival at the Boulder JCC