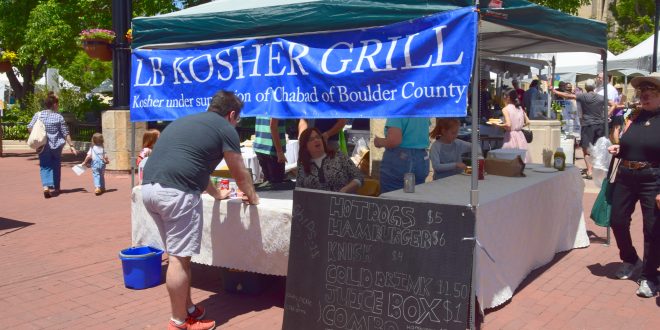 It’s no longer enough just to offer glatt kosher burgers and hot dogs at the Boulder Jewish Festival. The current organizers of this well-loved annual event want to address the important Jewish value of tzaar ba’aley chayim (Hebrew: animal welfare) as well. And, with the help of Hazon, the Boulder County Center for Judaism is stepping up to the plate – or the grill.

When the Boulder Jewish Festival started 23 years ago, Rabbi and Chany Scheiner, co-directors of the Boulder County Center for Judaism noticed that while all the listed food booths looked delicious, none of them were kosher. Feeling that “a Jewish Festival without any kosher offerings would be a shanda” (Yiddish: shame), they decided to create The Kosher Grill, in addition to the organizational booth they’d already committed to running.

At that time, it was not so easy to source kosher meat along the Front Range, but, after some searching, appropriate hotdogs and hamburgers were found, high-quality bakery buns were purchased, a grill was obtained, and they were in business. According to Chany, “It was a hit!”

She saw two types of people on the long lines for food. “Some came to the Festival from Denver because they knew they would be able to eat there,” she said. “The others waited all year to eat a kosher hotdog and hamburger.”

Since that first year, Chany says they have gone through several grills, each one larger than the last. And they long ago lost count of the thousands of burgers and hotdogs they’ve served. They quickly added drinks and chips, then pickles, knishes, and various other things. “One year, we even managed to get kosher bison burgers,” said Chany.

Today’s festival organizers Elizabeth Barrekette and Amanda Glucklich have been deliberate in their expansion of the number of Jewish values the festival expresses, especially the idea of Jews as being shomrei adamah (Hebrew: guardians of the earth). The event has been zero waste for some time and, Amanda said, “sourcing as many higher welfare animal products as we can is one more step towards truly embodying the meaning of kosher, or ‘fit to eat’.”

It took a lot of research, but eventually Rabbi Scheiner found a supplier. However, the price was out of reach. “We’d have had to charge something like $15 for a hamburger,” Chany said. Enter Becky O’Brien and the Boulder branch of Hazon, an organization dedicated to supporting the connections between Judaism and food, farming, and the environment in order to create a healthier and more sustainable world.

“Hazon is excited to be partnering with the Boulder Jewish Festival and its food vendors to source animal products that are higher welfare for this year’s event!” said Becky. “The Festival has always been a reflection of so many Jewish values, such as community, diversity, and caring for the earth (through actions like being zero-waste). We are excited to see Jewish values around animal welfare being taken into consideration as well.”

“The goal,” according to Amanda, “is to educate people in making better choices regarding the level of animal welfare and where their animal products are from. It’s an ongoing process, and it’s gaining momentum among Jews who are drawn to knowing where their food comes from. At the Boulder Jewish Festival, Hazon’s support enables our vendors to serve higher-welfare products that may not have been available to them in the past.”

Chany said, “By underwriting the cost differential, Hazon has made it possible for us to serve delicious, ethically raised, glatt kosher hamburgers and hot dogs at this year’s Boulder Jewish Festival.”