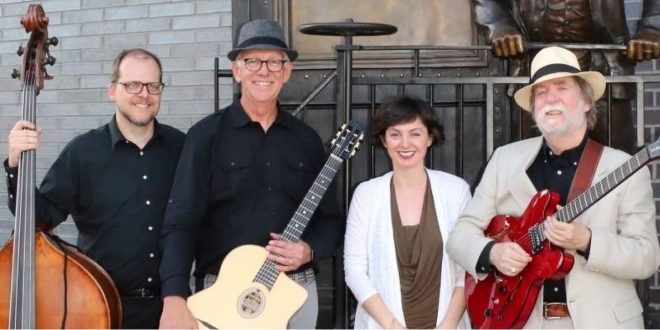 The tradition of borrowing from other traditions has long been an essential practice for the wandering Jewish people.

Klezmania, for example, proudly carries on the 20th century tradition of Jewish families enjoying Chinese food on the Christian holiday of Christmas. Our annual Christmas Eve Party – celebrated with a klezmer concert and traditional Chinese food – gets another ethnic jolt with this year’s addition of music from the robust Gypsy tradition.

Klezmer music borrowed from a variety of sources. Most significantly, Klezmer enjoyed long geographic proximity to gypsy music, as the Roma people and the Jewish people of Eastern Europe and the Balkans shared instruments, traded melodies, and enjoyed a similar affinity for minor notes and keys.

In the 1980s, musicologist became interested in the historical relationship between the itinerate Klezmorim – families of musicians who traveled from town to village to play for weddings and celebrations – and the nomadic Roma people known for their musical tradition and prowess. Both peoples lived on the margins of mainstream European society, were victims of prejudice, and expressed the sorrows and joys of their people in their music.

A revival of interest in Klezmer in Europe and America also began in the 1980s, with a resurgence of interest in the music of the Roma people following after the German unification in 1989, as ethnic and world music began to find favor in the new global, multicultural embrace of the arts. A decade later, as musicians were busy creating all kinds of fusions, the klezmer/gypsy hybrid was formed, with several bands leading the craze. Balkan Beat became a DJ phenomenon. The Amsterdam Klezmer Band played “traditional Yiddish music mixed with Balkan, Gypsy and Russian.” The Balcony Players moved from klezmer to Gypsy/Balkan. The Barcelona Gipsy Klezmer Orchestra formed in 2012. The Other Europeans, Balkano, and Kapelsky are all popular fusions of klezmer and Roma traditions.

In recognition of this strong connections between two vibrant musical cultures, the third annual Klezmania will feature Sheldon Sand’s Klezmer Consort along with Swing St. Vrain, a gypsy jazz ensemble based in Longmont. Formerly known as The Hot Club of Boulder, SSV plays “le jazz hot” in style of Django Reinhardt. The group draws material from a broad variety of sources, including Latin, choro, klezmer, and carefully selected pop tunes. Kathryn has spent her professional life writing about, teaching, and presenting the arts. Founding Director of the Boulder Jewish Film Festival, Kathryn was Director of Menorah and ACE at the Boulder JCC from 2003 through August, 2019. The former film and theater critic for the Boulder Daily Camera, Kathryn is the author of "The Fifty Greatest Jewish Movies" and "The Fifty Funniest Films of All Time." kathryn.bernheimer@gmail.com
Previous Shabbat on Skis is Back!
Next Weekly Edition: December 14th, 2018