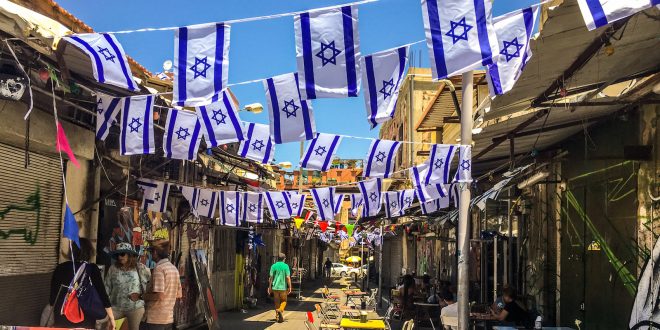 Join Boulder Israelis at the J to Commemorate and Celebrate

Kathryn Bernheimer April 16, 2018 Events Comments Off on Join Boulder Israelis at the J to Commemorate and Celebrate

As Israel celebrates its 70th anniversary, we marvel at all that has been accomplished since the Jewish homeland was born out of the ashes of the Holocaust. It was a miracle that the fledgling state survived, and that it continues to thrive, excelling in every area of human endeavor.

This week, we have a chance to celebrate the 70 years Israel has served as the only Jewish state and refuge for Jews from around the world. We begin by commemorating the sacrifice Israelis have made to ensure their beleaguered nation’s survival. Yom Hazikaron, honors Israel’s fallen soldiers, will be commemorated at the Boulder JC at 6:00 pm Tuesday April 17. The Israeli Memorial Day ceremony commemorates the personal stories of friends and relatives of Colorado residents who fell in Israeli wars and terror attacks. On Wednesday at 5:00 pm, we celebrate Yom Ha’atzmaut, Israel’s Independence Day. Join Israelis living in our community for this family friendly party, sponsored by the Boulder Israel Engagement Team (BIET), a partnership between the Boulder JCC and JEWISHcolorado. Activities for all ages including music, ’70s Israeli disco music and dancing, arts and crafts, games, breakout sessions for adults, and stories for children! The evening will include a special ceremony celebrating Israel’s 70th anniversary. Falafel, drinks, and desserts will be available for purchase.

Kathryn has spent her professional life writing about, teaching, and presenting the arts. Founding Director of the Boulder Jewish Film Festival, Kathryn was Director of Menorah and ACE at the Boulder JCC from 2003 through August, 2019. The former film and theater critic for the Boulder Daily Camera, Kathryn is the author of "The Fifty Greatest Jewish Movies" and "The Fifty Funniest Films of All Time." kathryn.bernheimer@gmail.com
Previous Boulder JFS Donor Spotlight: Jerry and Gail Sloat
Next Rabbi Marc’s A Dash of Drash – The Streets of Jerusalem, Episode 64