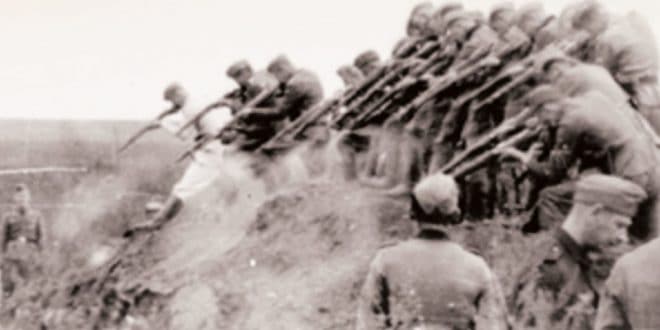 The Boulder JCC is thrilled to host a special exhibit and present a public conversation with Father Desbois, Founder and President of Yahad-In Unum, a Catholic priest and Holocaust scholar who has spent a decade as a detective uncovering the tragic fate of approximately 2 million Jews killed in Eastern Europe and the former Soviet Union.

Determined to discover all of the mass graves and execution sites of the Holocaust, document the killings and honor the victims who perished outside the walls of the Nazi death camps, Father Patrick Desbois has dedicated his life to an exhaustive research project on the Holocaust by Bullets.

The organization’s ongoing research on World War II crimes against Jews and Romani/Gypsy people in Eastern Europe has uncovered the location of more than 2,300 killing sites and documented more than 6,100 witness testimonies to these crimes.

The “Holocaust by Bullets” exhibit, presented at the Boulder JCC (after its success at Temple Sinai in Denver last year) presents the criminal process of the genocide step by step and shows the proof gathered by Yahad–In Unum. The ambitious exhibit provides the JCC with an incredible educational opportunity to offer the community, telling a story that many don’t know, the story of victims who perished in a systematic slaughter far from the Nazi death camps. Tours of the exhibit will be arranged for groups of all ages, but it is appropriate for 7th grade students through adults. “When we opened the new J, we were very clear about what kind of platform we wanted to be capable of offering,” says

Susan Rona, Senior Director of Programming at the J. “We are an educational institution with a cultural mission. The Holocaust by Bullets exhibit and conversation with Father Desbois provide a unique opportunity for us to educate the community about the importance of how we treat each other. This piece of history we are sharing at the J teaches us what happens when we treat each other without humanity.”

“When I was younger,” says Father Desbois, “I used to think that killers had awful faces, they were psychotic or monsters, while saviors were nice people. Unfortunately, there is only one human kind. Everybody can be a killer. Everybody can be a victim.”

This is what the Holocaust by Bullets exhibit helps realize when it unveils the personal dimension of the crime committed against the Jews in Eastern Europe and the impact of each and every individual decision taken by those who were a part of the process. BJCC Executive Director Jonathan Lev shared, “The Boulder JCC is honored to bring this important exhibit to Boulder in partnership with Yahad-In Unum, Yahad Colorado, and with the support of many other local organizations. The community built the JCC to convene – bringing individuals, families, and organizations together to build community through meaningful shared experiences. The Holocaust by Bullets Exhibit provides us a key opportunity to more deeply engage and connect to our past to inform our present and future. We welcome all to join us in this educational experience.”

The exhibit is a part of the Yahad–In Unum’s Holocaust Education Week in Boulder taking place from November 12th to November 17th, organized in partnership with the Boulder JCC and Yahad Colorado (Colorado’s branch of Yahad-In Unum, the first such US affiliate created in March 2018 in Denver).

Besides the exhibit, the Holocaust by Bullets Education Week offers two public conferences: a public lecture by Father Patrick Desbois and a public presentation by Yahad–In Unum’s educators about the work of the organization as well as a vast teachers’ training program. Its first edition in Denver last year has trained 62 educators to teach about the Holocaust, based on Yahad’s forensic research.

For more than a decade, Father Desbois and the Yahad–In Unum team have investigated hundreds of sites across Eastern Europe where on-site mass shootings took place, including countries such as Ukraine, Russia, Belarus, Poland, Lithuania, etc. There are just a few more years left to complete this project whose aim is to identify names and locations of the execution sites. Yahad–In Unum’s methodology includes extended archival research and interviews with the last eyewitnesses of these crimes. There were very few survivors of the shootings, but their witnesses are still alive, although they are fewer and fewer every year. Father Desbois’ research divides the participants of these killings into three categories: victims, perpetrators, and witnesses. Common themes emerge: the late night arrest, the road traveled, the undressing – but not always – then the shooting, in some cases being buried alive, and the inevitable looting. Townspeople were regularly invited to attend, and commandants handed out candy to children while watching their Jewish neighbors being murdered.

Yahad–In Unum teams can still find artifacts on the execution sites they locate. A piece of jewelry with a Jewish star on it was sometimes held onto and represented an act of resistance. Some mass graves have memorials, but most do not. Some sites are now under highways, swamps, or new homes. Mass graves are never disturbed, but documented and memorialized.

Father Desbois was profiled on “60 Minutes” (The Hidden Holocaust) and has written three books: The Holocaust by Bullets: A Priest’s Journey to Uncover the Truth Behind the Murder of 1.5 Million Jews, In Broad Daylight. The Secret Procedures behind the Holocaust by Bullets, and The Terrorist Factory: ISIS, the Yazidi Genocide, and Exporting Terror. He also lectures widely around the world. Each talk is different as he draws upon a deep wellspring of knowledge, and on his even deeper sense of personal outrage.

Those perpetrating crimes against humanity believe that they can leave the dead in unmarked pits, and their actions will never be revealed. But Father Desbois’ teams have found that when killings are committed in broad daylight there are eyewitnesses who are prepared to speak to outsiders. Getting that testimony shatters the myth that the details of genocide can be a secret and helps ensure that the dead will not remain forgotten.

While talking about the exhibition, Marco Gonzalez, the Executive Director of Yahad-In Unum, highlights its universality and timelessness: “Whoever comes to see this exhibit, whether he is or is not a Jew, is able to realize that this kind of criminal strategy is perpetrated in other mass crimes today. A better awareness of this unfortunately obvious fact will hopefully help people to recognize the continuity of these kind of crimes – and to stand up against the genocide today.”

We invite you to experience the Holocaust by Bullets Exhibit at the Boulder JCC. The exhibit is open to the public through scheduled docent-led tours, and is appropriate for 7th grade students through adults.

Individuals, families, and small groups (6 people or less) may

Please join us at the Boulder JCC for A Conversation with Father Patrick Desbois, Founder and President of Yahad-In Unum.

The conversation will be moderated by Scott Peppet, Professor of Law and Wolf-Getches Fellow at the University of Colorado Law School.

We invite you to register for the 2018 16-hour Holocaust by Bullets Teachers’ Seminar. This seminar will be offered twice at the Boulder JCC.

Educators interested in integrating material about the Holocaust in their classes are invited to join us for one of these two sessions.

For more information and to register, please contact Todd Hennessy at tphennessy@hotmail.com or 720-210-4374.

Please join us at the Boulder JCC for Yahad-In Unum Educators’ Public Presentation. Come learn more about the Holocaust by Bullets and Yahad-In Unum’s investigative work in Eastern Europe.

We will hear from the researchers who have participated in the investigative trips, and work on a daily basis with Yahad-In Unum’s research and curriculum. This will be the first time that Yahad Educators will present to the public in Colorado.

About the Boulder JCC

Founded in 1984, the Boulder Jewish Community Center [Boulder JCC], a 501(c)(3) nonprofit organization, is a dynamic center for community and education. In June 2016, the Boulder JCC opened its new ten-acre campus and two+ acre educational farm, supported by donations from more than 850 individuals, families, businesses, and foundations. Open and welcoming to all, the JCC provides a home for meaningful gatherings and events and is a central address of Jewish life in Boulder County and beyond. Since opening the new campus, the Boulder JCC has been recognized both nationally and internationally for its innovative approaches to engagement and education while welcoming more than 20,000 community members annually. The Boulder JCC is located at 6007 Oreg Avenue in Boulder. For more information, visit boulderjcc.org, or call 303-998-1900.

Kathryn has spent her professional life writing about, teaching, and presenting the arts. Founding Director of the Boulder Jewish Film Festival, Kathryn was Director of Menorah and ACE at the Boulder JCC from 2003 through August, 2019. The former film and theater critic for the Boulder Daily Camera, Kathryn is the author of "The Fifty Greatest Jewish Movies" and "The Fifty Funniest Films of All Time." kathryn.bernheimer@gmail.com
Previous Daniel Kahn & the Painted Bird to Play CU in Free Concert
Next Jewish Life Senior Program Officer Lisa Farber Miller Plans to Leave RCF