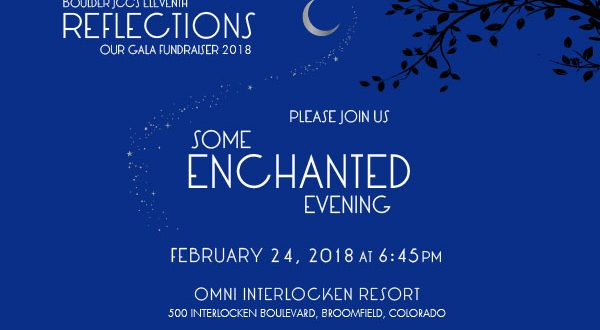 Reflections is fast approaching and we are so excited to be celebrating the 11th anniversary of our annual gala fundraiser! There are still tickets available (purchase tickets here), so don’t miss out on the party of the year, and a great opportunity to give back to the Boulder JCC. For Reflections 2018, we are thrilled to be honoring Kate and Josh Dinar.

Josh and Kate Dinar met twenty years ago on a snowy night at the West End Tavern shortly after moving from their respective home states on the east coast. They’d both been in Boulder for less than a month, were kids working temp jobs, and had yet to form many local connections. From that fateful night, over a lot of years that have disappeared in a blink, Kate and Josh built a life here — a family and friends and businesses — and they couldn’t imagine calling anywhere else home. The JCC has become an integral part of that home.

Josh and Kate are driven in their work and daily lives by things that bring people together. They’ll never forget what it was like to be strangers in a new town when they met in a space designed to bring people together. That is exactly what so inspires them about the JCC — it offers an entry point for those in search of community, and an open outlet for the various expressions of that community.

Even after Josh and Kate found their home in Boulder, as an interfaith couple with young children they struggled to find a place that felt truly welcoming and that spoke to the heritage they wanted to impart to their children. They were looking for somewhere that offered inclusivity in more than just words, and the JCC offered that, and so much more. The experience they had in finding someone to marry them in an interfaith tradition made skeptics of them that such a place existed, but their experience since coming to the Boulder JCC has been restorative. They look forward to their oldest child becoming a Bar Mitzvah next year with Judaism Your Way, an organization whose classes take place in the Boulder JCC, and one that’s indicative of the truly welcoming spirit they’d hoped for.

Josh has served on the JCC board in what seems like a lifetime appointment to the executive committee. It’s been his honor to witness and be a small part of the evolution of the organization over the last decade. He’s been in awe of the example the JCC has set as to the power of what a community can do when it comes together with determination, a sense of humor, and truly intelligent, magnanimous leadership. The people Josh and Kate have met as a result of their involvement are a testament to the rewards of volunteerism. To be in a room full of those people is overwhelming and gratifying beyond words.

Check out the other honorees for Reflections 2018, Alice Messinger and Carolyn Grant.