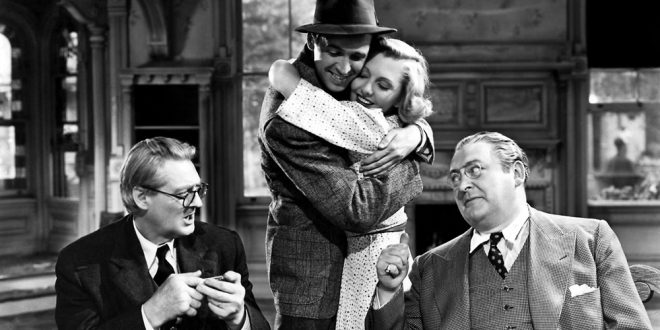 In the 1930s, two Jewish leading lights of Broadway teamed up for a string of hits before going on to individual success in the golden age of the American musical.

Moss Hart and George S. Kaufman won the Pulitzer Prize for “You Can’t Take It with You” in 1937, and went on to even greater popularity with the classic comedy, “The Man Who Came to Dinner.”  Kaufman later won a Tony Award as a director for “Guys and Dolls,” while Hart won for “My Fair Lady.”

Shortly after its Broadway debut, the whimsical “You Can’t Take it with You” was transformed into a paean to populism by director Frank Capra and screenwriter Robert Riskin.

Released in 1938, the zany screwball comedy won a slew of Oscars, including Best Picture and Capra’s third award for Best Director. In its Sept. 2, 1938 review, the NY Times called it “a grand picture.” Time magazine in 2008 referred to it as “Easily the No. 1 cinema comedy of 1938.” Like the 1936 play, the film follows the antics of the freewheeling Sycamore household, presided over by Grandpa Vanderhof (Lionel Barrymore), a former businessman who has turned his back on commerce to enjoy life. With the eccentric Sycamores, anything goes. The one normal member of the household is Alice Sycamore (Jean Arthur), in love with wealthy Tony Kirby (James Stewart). Naturally, when the snooty, stuffy, aristocratic Kirbys come to the Sycamores for dinner, hilarity ensues.

This summer, theater audiences have a chance to see the hit screwball comedy performed by the Colorado Shakespeare Festival, July 20 – Aug 12 indoors in the University Theater. ROTTEN TOMATOES Critics Consensus: It’s predictably uplifting fare from Frank Capra, perhaps the most consciously uplifting of all great American directors — but thanks to immensely appealing performances and a nimble script, You Can’t Take It with You is hard not to love.

Kathryn has spent her professional life writing about, teaching, and presenting the arts. Founding Director of the Boulder Jewish Film Festival, Kathryn was Director of Menorah and ACE at the Boulder JCC from 2003 through August, 2019. The former film and theater critic for the Boulder Daily Camera, Kathryn is the author of "The Fifty Greatest Jewish Movies" and "The Fifty Funniest Films of All Time." kathryn.bernheimer@gmail.com
Previous JCRC Celebrates Policy Successes During 2018 State Legislative Session
Next Musical Friday Nights Are Back at Bonai Shalom