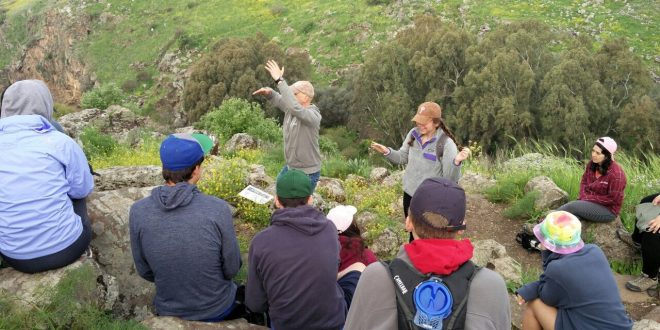 Walking in the Footsteps of Jewish Heroes

Marina Brodetsky May 4, 2017 News Comments Off on Walking in the Footsteps of Jewish Heroes

Stories of Bravery at Tel Faher t is a tranquil spring morning in the northern Golan Heights, with flowers in full bloom and nearby cows milling about between long deserted buildings. For the busload of Jewish American teenagers coming for a visit, this pastoral scene will be the backdrop for one of the most dramatic stories in modern Israeli history.

The 10th and 11th grade students are from Alexander Muss High School in Israel’s (AMHSI-JNF) eight-week mini-mester program, a Jewish National Fund (JNF)-sponsored study abroad high school whose unique academic approach fuses traditional classroom study with informal experiential learning. The AMHSI-JNF curriculum offers an intensive review of modern Israel and over 4,000 years of Jewish history, providing the teens with a hands-on framework from which to discover and explore their own link within the chain of Jewish continuity. On this particular morning, Tel Faher and the Golani War Memorial is their classroom.

Yossi Katz, the AMHSI-JNF history teacher leading the field visit, settles the group under a giant eucalyptus tree as they take out their notebooks. He starts with a basic overview of the Golan Heights and its importance to Israelis—fertile agricultural land, award-winning wineries, pristine nature, and rare quiet, among other qualities. As the students diligently took down notes and important dates relevant to the region’s history, Katz began telling the tale of the Golan’s greatest hero, Eli Cohen. Almost immediately, as though spellbound, the teens put down their pens and simply listened. Cohen was an Israeli spy who played a pivotal role in Israel’s conquest of the strategic Golan Heights from Syria at the end of the 1967 Six-Day War. Dedicated to the state and people of Israel, Cohen—an important Mossad agent—left his wife and small children for several years and went undercover in Damascus, Syria. Throughout his mission, Cohen successfully forged connections with business, military, and political leaders, using them to procure strategic security information for Israel. In 1965, when the Syrians discovered Cohen’s true identity, he was brutally tortured and executed. Yet despite his tragic end, the information Cohen gathered gave Israel an upper hand against Syrian forces two years later during the Six-Day War.

The students—with a look of bewilderment and shock—remained quiet, realizing that Cohen’s bravery and self-sacrifice is what has allowed them to enjoy their field visit.

In addition to Cohen’s story of heroism, this hill was also the site of one of the fiercest battles of the Six-Day War, fought primarily by the Israel Defense Forces’ (IDF) Golani Brigade. Most of the regiment that attacked the Syrian position were killed or wounded in the early stages of battle, yet several soldiers bravely carried on, eventually conquering the Golan Heights. Looking at the small village of Sha’ar Yeshuv, Katz recalled how life was for Israeli residents before Israel captured the Golan Heights from Syria. “Due to incessant attacks by the Syrians from this vantage point, the people barely left their bomb shelters. Thanks to the heroes of Tel Faher, the residents had their first break in almost 20 years.”

As Benjy Behrman, another AMHSI educator on the trip explained, the struggle to maintain strong border communities has remained an ongoing theme in Jewish history. “Before Sderot, there was Gadot, a community in the Hula valley that was established in 1949,” said Behrman. “We don’t have to look very far back in Jewish history to find heroes willing to face existential threats head on—often at a great personal expense.”

This is what struck Jessica Umbro, age 16, and an 11th grader from Yardley, Pennsylvania. She was impressed by the stories of Eli Cohen and the soldiers who fought for the safety of the Jewish communities at the foothills of the Heights. “These are real Jewish heroes,” she said. “They shatter the stereotype of the weak, helpless Jew. If we have individuals like these—selfless, courageous, and strong—then we have the ability to create a new image for ourselves.”

Umbro’s classmate, Izzy Singer, age 15, and a 10th grader from Maplewood, New Jersey, agreed. “This morning, and this trip in general, made me feel so proud. Hearing these stories, particularly at this place—it makes me feel deeply connected to Israel and I want to stand up for it wherever I go.”

The visit to Tel Faher was only the first stop of the group’s two-day excursion exploring the majestic Golan Heights. Thanks to this onsite history lesson, every student left Tel Faher with a newfound appreciation of the exceptional effort it took to get to where Israel and the Golan Heights are today.

Previous Transformative Time: When Your Enemy Becomes Your Ally
Next Kol Nashim Women’s Choir to Perform to Benefit Battered Women May 21st