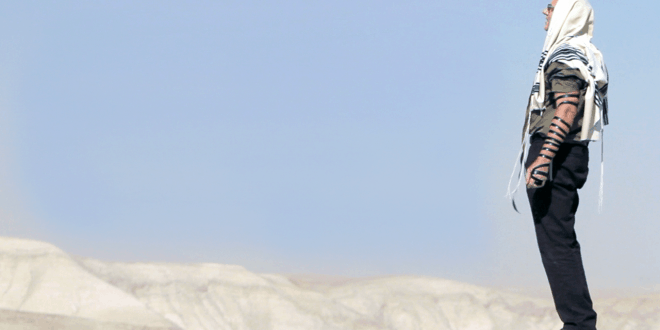 Sal Litvak Shares His Strange Journey at the J How best to describe Sal Litvak? How do you describe any polymath?

Sal is a film director, writer and producer. He is definitely a humorist, as his Seder satire “When Do We Eat?” attests. And he’s the Accidental Talmudist.

What is an “accidental” Talmudist? In this case, a guy who finds himself in the seemingly unlikely position of being an internet sensation who inspires Jews and non-Jews in 70 countries by sharing ancient Jewish wisdom six days a week.

As the Accidental Talmudist he shares daily posts on Jewish wisdom, history and humor with nearly a million followers.

Sal comes to the Boulder JCC for two programs. He will speak after the screening of “When Do We Eat?” on Thursday, June 8 at 7:00 pm. On Sunday from 4:00 – 6:00 pm at the J, the Accidental Talmudist will share his story. After the screening, there will be a Q & A with director Sal Litvak. He will share an astonishing story of how this indie film became a holiday classic beloved by Jews around the world who watch it with their families every year around Passover. Evening with the Accidental Talmudist, on how an immigrant kid from Chile ended up directing movies in Hollywood and sharing Torah with a million people.

REGISTER FOR “WHEN DO WE EAT?”

REGISTER FOR THE ACCIDENTAL TALMUDIST

Tags accidental talmudist Boulder JCC rscs when do we eat

Kathryn has spent her professional life writing about, teaching, and presenting the arts. Founding Director of the Boulder Jewish Film Festival, Kathryn was Director of Menorah and ACE at the Boulder JCC from 2003 through August, 2019. The former film and theater critic for the Boulder Daily Camera, Kathryn is the author of "The Fifty Greatest Jewish Movies" and "The Fifty Funniest Films of All Time." kathryn.bernheimer@gmail.com
Previous JEWISHcolorado Commemorates the 1967 Six Day War
Next Weekly Edition: June 9th, 2017