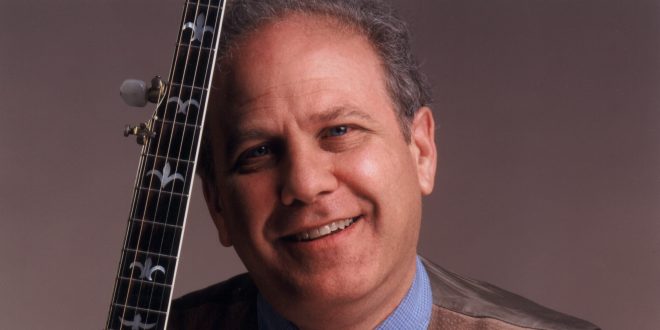 Bluegrass and Jazz are both considered American musical idioms. These two musical forms come together in Pete Wernick’s Flexigrass, a band formed 25 years ago to create a unique musical hybrd. Wernick, with his wife Joan Wernick and fellow bandmates, comes to the Boulder JCC on Sunday, October 22, at 7 pm for the second music@theJ concert.

The inclusion of Flexigrass in ACE’s new monthly music series has everything to do with Wernick’s status as a world-class musical force – and a little to do with the fusion of two American musical inventions.

The theme of “America” infuses much of the music being presented in the 9-month series of concerts created with the goal of presenting the arts in a cultural context. How did the Jewish immigrants who wrote the great American musicals convey the dream of a cherished homeland in their Broadway show tunes? The visions of “Amerike,” the promised land dreamed of in the shtetl, pervade the songs that will be performed during Faye Nepon’s February concert, “Somewhere Over the Rainbow: Immigrant Dreams and the American Musical.” Next month, Gregory Walker returns with a multi-dimensional look at Polynesian culture. Researching the show on a recent trip to Hawaii, Walker was captivated by the history and culture and was determined to move past the tacky hula parties and onto a more authentic and contemporary depiction. “Tiki Beat Taboo: Not Your Grandmother’s Luau” is a perfect fit for music@theJ’s theme of expanding American musical horizons. The origins of American folk music will be explored in January with a concert focused on Woody Guthrie, the Weavers, Pete Seeger and more. At a Lunch and Learn the week before the concert, KGNU “Roots and Branches” host Leland Rucker will detail the history behind the songs. Other concerts also touch on the theme of America – right up through the Paul Simon tribute concert that closes the series in May. Simon’s “(They’ve All Gone to Look For) America” will be on the program.

It has been said that art does not respect political or geographic borders. It migrates with ease. It adapts, it assimilates, it borrows from its neighbors, it mingles old with new with impunity. Music cannot be confined. As soon as it is defined, it transforms itself.

Music offers a wonderful metaphor for America, inspiring us to celebrate diversity. I mean, if bluegrass and jazz can get along, well…

Kathryn has spent her professional life writing about, teaching, and presenting the arts. Founding Director of the Boulder Jewish Film Festival, Kathryn was Director of Menorah and ACE at the Boulder JCC from 2003 through August, 2019. The former film and theater critic for the Boulder Daily Camera, Kathryn is the author of "The Fifty Greatest Jewish Movies" and "The Fifty Funniest Films of All Time." kathryn.bernheimer@gmail.com
Previous Boulder Gun Violence Prevention Activist Ken Toltz Announces Campaign for Congress
Next Boulder JFS Raises Over $90,000 at Reel Hope ’17