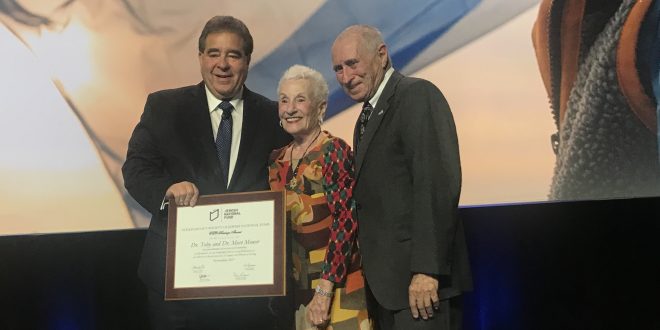 JNF Honors Drs. Toby and Mort Mower With ‘Heritage Award’ for Their Lifetime of Service

Marina Brodetsky November 13, 2017 News Comments Off on JNF Honors Drs. Toby and Mort Mower With ‘Heritage Award’ for Their Lifetime of Service

Jewish National Fund (JNF-USA) honored Drs. Toby and Mort Mower of Denver (formerly of Baltimore, MD) with the JNF Heritage Award for their lifetime of service and leadership on Sunday, Nov. 12 at its National Conference in South Florida. Presented at the Diplomat Resort in Hollywood before a crowd of more than 1,000 from across the United States, including over 250 college students representing 100 campuses, JNF CEO Russell F. Robinson thanked the Mowers’ for their unwavering dedication to JNF’s vital work in Israel.

The Mowers’ connection to JNF began decades ago. “I met Toby and Mort 24 years ago when they moved back to Baltimore,” recalled Diane Scar, JNF’s National Campaign Director. “We were holding a parlor meeting on a snowy night in 1998, but due to blizzard conditions, only Toby and Mort were present. I called them the next day to thank them for coming and they expressed interest in wanting to be more involved with JNF.”

“It is indeed an honor to receive Jewish National Fund’s Heritage Award. Our contributions in terms of being a charter member of Women for Israel, JNFuture, the  Parsons Water Fund, and the Baltimore, National, and Mountain States Board of Directors, has allowed  us to help improve the quality of life for the State of Israel and its people. We thank Jewish National Fund for this privilege. Our work on behalf of JNF will never end.”

Dr. Mort Mower added, “It seems like yesterday that we began working on behalf of Jewish National Fund. Who would have thought so much could be accomplished in just a few decades. But the work is not done. It will continue as Israel to innovate water solutions for itself and its neighbors. ”

“For many years, Mort served as the national chair of JNF’s Parsons Water Fund, which builds reservoirs, recycles wastewater, and creates other technological advancements,” Scar explained, adding “Mort’s interest and persistence and philanthropy propelled JNF to pursue research and technology to improve water solutions for the land and people of Israel.”

Drs. Toby and Mort Mower “are extremely passionate about Israel and helping others. When they were in Baltimore, they started the Jewish Recovery Houses to help Jewish men and women who were substance abuse addicts,” she noted. “They are not only people who fund projects, but they give of themselves and help to raise Jews to be aware of the world around them and how they can make a difference,” Scar said.

JNF embodies both heart and action; our work is varied in scope but singular in benefit. We strive to bring an enhanced quality of life to all of Israel’s residents, and translate these advancements to the world beyond. JNF is greening the desert with millions of trees, building thousands of parks, creating new communities and cities for generations of Israelis to call home, bolstering Israel’s water supply, helping develop innovative arid-agriculture techniques, and educating both young and old about the founding and importance of Israel and Zionism. JNF is a registered 501(c) (3) organization and United Nations NGO, which continuously earns top ratings from charity overseers. For more information on JNF, call 888-JNF-0099 or visit www.jnf.org.