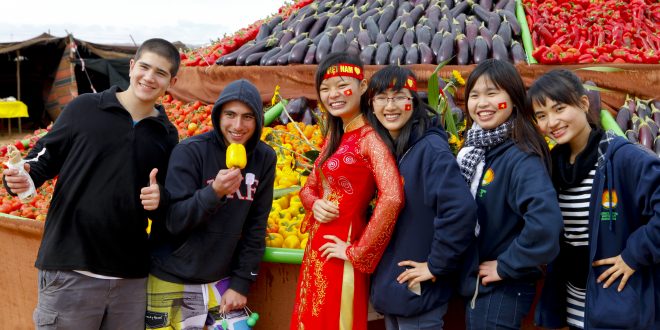 Feeding the World with Knowledge Since the beginning of mankind, agriculture has played a major role in human development. It has been pillar in the economic structures of various cultures, essential for feeding the world’s population and promoting local employment and a vast exporting system.

Today, agriculture is still king in our modern economy, and it holds the ability to strengthen and advance local markets. In Colorado, for example, the entire state has benefitted from agriculture through the development of by-products and industries like dairies, wine, bio-diesel, and even agro-tourism. Another example is Israel, a small country in one of the driest parts of the world that was founded by farmers working the land. To this day, Israel is a giant in the agriculture market and a leader in introducing new methods, technologies, and crops—such as the Jaffa orange and the cherry tomato—that position the country as an agricultural expert. However, due to unpredictable shifts in global markets, climate change, and the depletion of natural resources and land, agriculture is threatened, all while global demand continues to rapidly increase as the world’s population grows.  In fact, at current rates, food production must increase more than 70 percent in the next several decades just to meet growing demands, making “Food Security” a serious global issue to address. The world food crisis is front and center in developing countries, where existing agriculture is often archaic and cannot supply the needs of their increasing populations.

We live in a global village, where every local economic fluctuation and crisis is sensed in all corners of the world. For that reason, it is crucial that we act now to strengthen and elevate developing countries, and implement advance agricultural techniques that will boost the local economy and provide food security for local citizens, as well as for the entire world population.

For me, the answer lies in the Arava. In the most arid and remote region in Israel’s Negev Desert, a blooming and prosperous agricultural industry has risen from the desert sands by determined farmers. The Arava’s accomplishments are no simple feat and it has had the added benefit of promoting the development of the entire region. Knowledge is power, and we are eager to share this knowledge with others around the world. The Arava International Center for Agriculture Training (AICAT) is a unique program located in the heart of the Arava that aims to impart professional advanced agricultural knowledge and skills to students from developing countries from Asia and Africa. With support from Jewish National Fund (JNF-USA), AICAT is able to provide over 1,000 students each year with the opportunity to study various agricultural subjects while receiving practical training in the Arava’s farms. Students are exposed to the creativity and pioneering spirit of the Arava’s farmers who came to this once barren land to cultivate the desert, and through it all they learn that “If you will it, it is no dream.”

These days, together with the Jewish National Fund we are building a new campus for AICAT, which will double the amount of students attending the program. But AICAT is more than just a school. It is an engine that promotes growth for our students as well as for the Arava, creating jobs and developing communities along the way, helping more Israeli families realize their dream of living in an affordable place where opportunities are endless.

If I were a mechanic, I would say that at AICAT we don’t just give the students the keys to the car, rather, we help them build the engine first. At heart, I’m still a farmer, and I am proud to sow the seeds for tomorrow’s agricultural leaders at AICAT.

Hanni Arnon is a farmer, the director of AICAT, and a proud partner of Jewish National Fund. She is a resident of Idan, a community in Israel’s Central Arava.